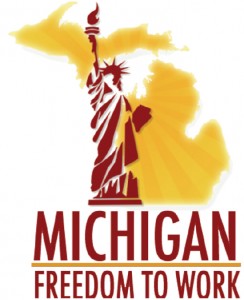 Relentless Positive Action is a sissified way of saying “I don’t want confrontation with labor” by Mr Snyder.

No one expected Rick Snyder, the left of center Republican governor to EMBRACE Right To Work, but at some points, in order to continue getting support for his other pet projects he has said [privately] he will “sign if it comes to his desk.” The outward warning now, is to make sure that doesn’t happen, or at least to buy him some time until this years election removes a Republican majority from the state house. A loss NOT due to conservative action, but that which has capitulated to the non conservative participation with the governor’s agenda. Skubik opines:

“Some Republicans are taking the risk and ignoring their governor’s pleas to leave this alone because they can’t help it. Now that they have hefty majorities in both the House and Senate, some believe it will help to cement their own re-elections with conservative voters back home. Plus they’ve been itching for years to do it.”

The majorities exist now, and may not again, unless the Republicans embrace that which brought them there. A strong conservative message coupled by bold action that will help workers in this state face down the liberal leftist labor elements that handicap it in the global marketplace. Snyder’s reinvention of picking winners can hardly match the strength of policy that encourages naturally, the strong development of vibrant business in Michigan.

One needs to remember that much of the success and wealth accumulated by this executive office holder was done so as the result of government-business partnerships.

He knows no other way.

Rick Snyder wants continued federal dollars for trains, Roads, and Bridges. His administration is hell bent on maintaining EDC type functions, and in fact the EDC may well be the tool he uses to steal the treaty out from under the Ambassador Bridge company. (Working on that issue – feel free to get ahead of me on it)

But no where in his agenda is the seeking of business friendly concern with regard to employer-worker relations.

He will not stand up for the business operator who does so naturally.

And as Indiana passes its law, Michigan will take another competitive hit, and remain beholding to a regressive labor controlled work environment.

And we cannot let that happen without a fight.

← Rep Walberg Responds To Administration’s Rejection Of Keystone Pipeline
Parents: ‘Please consider the kids and parents, and let us choose’ →