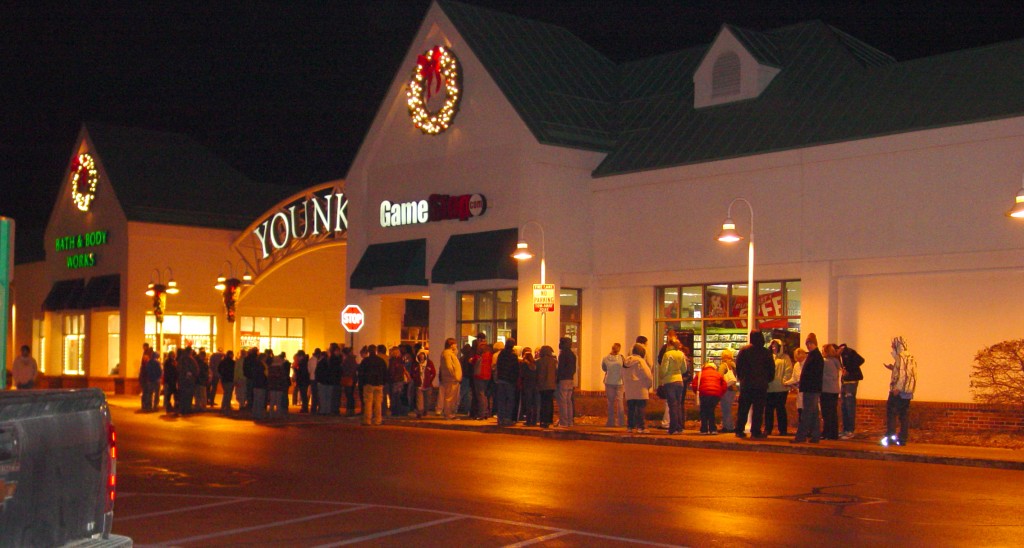 This is somewhat of a ‘part-II’ I look at Thanksgiving, and Black Friday in 2011 as it is in Traverse City, MI.

Last year’s Friday was a bit cooler, but the crowds were out and about.  This year, its about 45-48 degrees, and the air is a little damp.  After feeding 25 folks at the stead, yet again reeling from a loss (a couple days ago) of a beloved aunt, Candy and I decided to lighten up the evening by making a repeat trip through the Traverse City Box store collection.

Though not nearly as complete in the overall picture compilation as 2010, something became obvious right away; the temperature, and earlier openings seem to have brought out more folks. Perhaps it was Lions fans wishing to spend themselves out of depression.

The lines were longer, and the lots fuller.  In fact, the traffic was heavy and we started at a quarter to midnight.  Our first stop as seen above, was at the Cherryland center, as the photo above shows had its share of early deal seekers.  This line was at least doubled with the addition of the rear entrance which is not shown.  One of the arrivals as I was taking the shot noted the Target store line was “amazing.” He added “you’d better hurry,” as it was nearly 12, and they would be letting folks in the doors soon.

He was correct.  The line shown in last year’s pictures easily multiplied by 4 or 5 times, stretched around to the front of the Grand Traverse Mall nearly to the Macy’s on the other end.  The beginning part of the line well taped off, and the parking lot quite full.  I should note that along the way we passed a packed parking lot at the Walmart as well.  No lines there as they must have been open already, but the number of cars parked in a non conforming manner was a strong indicator of high numbers present. 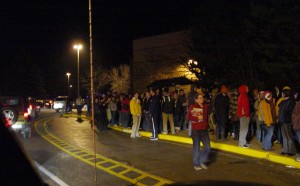 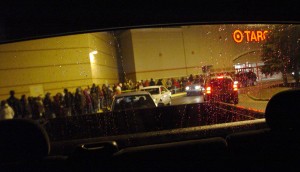 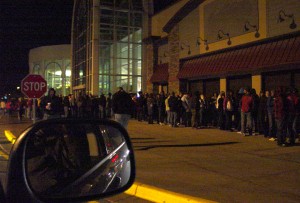 The Grand Traverse Mall parking lot was full, and at least one near miss accident was observed as we had arrived.  There was no parking to be had anywhere near the Target, and getting out into regular traffic when leaving was as difficult as it might be during rush hour on a weekday.

Our next stop was Best Buy. 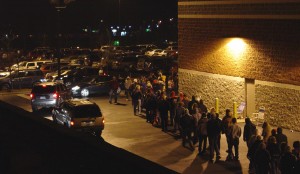 We parked on the road just up from this big box house.  It was clear from down the road that the line stretching around the building meant a full lot, and not a chance in hell we would be able to stop even long enough to take the pictures you see here.  This set by the way was taken at Midnight, and the line had already started moving.  Early in the day, news crews were out taking shots of folks who had forsaken normal Thanksgiving fare, and have literally camped (with tents etc) to get the best chance at those discounted electronics.

One must admire such attention to priorities.

The line at the Best Buy eclipsed the simple around-the-corner line of last year.  This time it was doubled up and clear around the building’s loading area.

I didn’t observe any “You must be THIS tall to go on this ride” signs.

And again, as it has been, and will likely always be, there were no local merchants taking advantage of deal seekers willing to camp on their doorsteps. Another trip to a familiar stop on Front street, revealed a scene not unlike that shown in 2010.  A barren street scape sans the frosty appearance, Traverse City’s downtown remains empty on the eve of the day which purportedly is the busiest of the year for retailers both large and small. 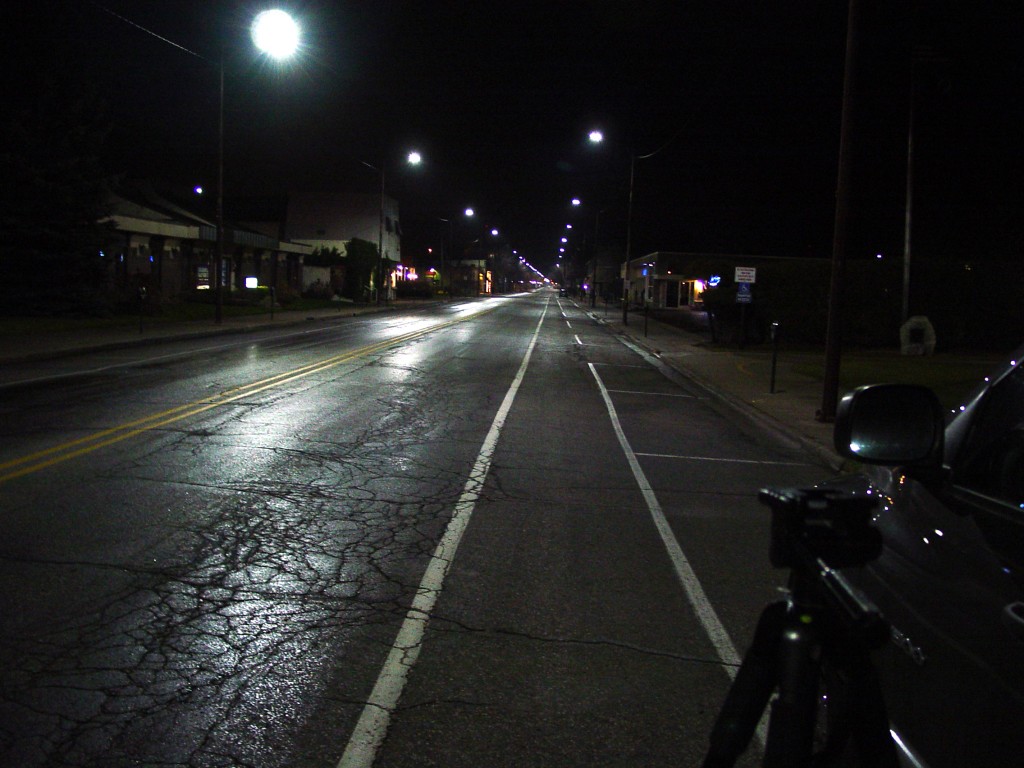