This particular instance of fear prompted by those who don’t wish to have their 401ks, and retirement savings wiped out by who knows what?

If I had more than a modest amount in the market personally, I would be more concerned personally.  However, if you consider that the businesses which are on the open exchange were hardly different on Friday than they were at the closing bell Monday, it would seem there is probably an over reaction.

One that mirrors such unhinged lunacy by the likes of Michael Moore.

Why must we suffer these fools?

The downgrade decision by S & P prompting calls by the fat filmmaker for the president to tweet out: 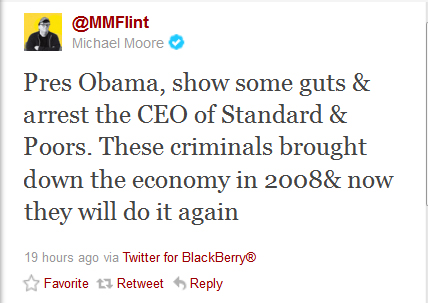 “Pres Obama, show some guts & arrest the CEO of Standard & Poors. These criminals brought down the economy in 2008& now they will do it again”

Of course Michael should remember, this is not YET that transformed state of his Marxist ideals.  To arrest someone for telling it like it is, would hardly constitute anything recognizable in this country.

Even if the S & P head was mistaken (in my view NOT) it is not an arrestable offense.

Perhaps the fat bastard has spent too much time with Fidel in Cuba.

And once upon a time trading with THAT country had more dire consequences.

Sadly, there are a few in Traverse City who make us see this walking Turducken once a year when we have the “film festival,” a marvelous time when b movies and union propaganda films are interspersed with two or three decades old box office hits, which aren’t even produced on DVD any longer.

In 2011 it was Congress making a bad deal with an even more miserable president, you corpulent clod.

And in 2008 it congress was equally deficient, but it was frosted with a speaker of the house holding this country hostage to higher gas prices for her own personal gain.

Some guts?  Given the presidency suffered a downgrade in 2008, perhaps Obama should show some humility and step down, taking his entire cabinet of communists and Mao lovers with him.