The record eagle wears its own tolerance of free speech and disagreement like the dirty underpants of a failed drunken ship’s captain. 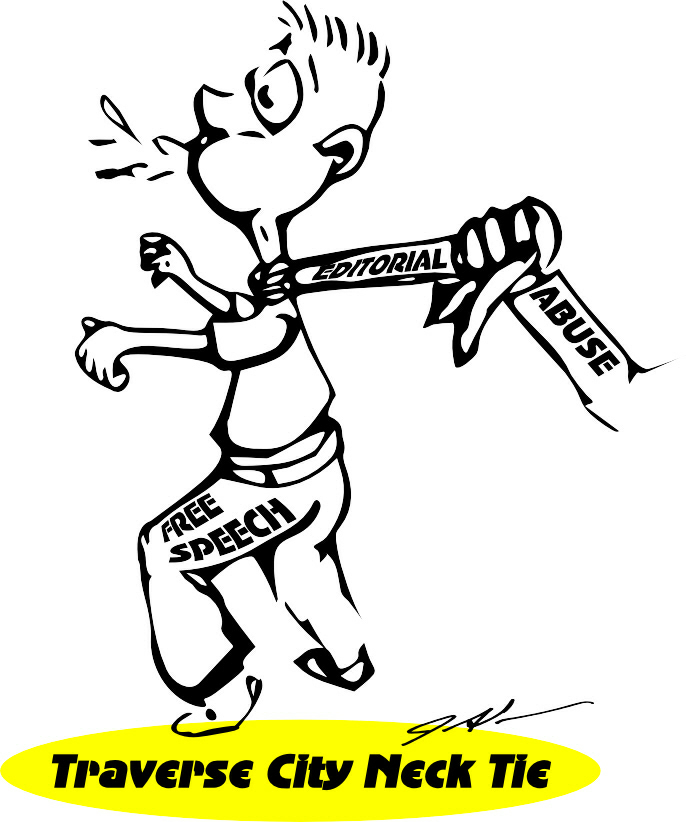 The editorial today equating the birthers to racists crosses the line from responsible editorial opinion to unoriginal baiting and an attempt to stifle discussion.  In its editorial “parsing the subtext of the racist birther conspiracy” Traverse City Record Eagle editorial staff has again used the “R” word to label those who hold a differing view from their own.  The paper has called those who questioned the effort of Obama to hide his birth certificate for the last three years, outright racists.

The editorial starts off:

It’s time to recognize the “birther” conspiracy wingnuts for what they are.
They’re racists.
There is no other explanation for the circus sideshow that’s been going on since the inception of the Obama administration.

The start of this editorial is mild compared to the continuing ignorant vitriol designed to merely stifle free speech and offer an extreme leftist view of conservatives and those who’s only crime is to want to verify that the man who was elected president in 2008 is actually legal to occupy that office.  Continuing:

The birthers … just can’t stand the fact that a man born to a white mother and a black father could ever succeed …After all black people – even those of mixed race – are lazy and dumb, goes the real birther subtext.
…
Regardless of the code words, its all about race. particularly about the race of one man – the sitting president of the united states.

… enough is enough. It’s time for the birthers like Trump and Taitz and their Tea Party sympathizers – and yes even their cowardly fellow travelers in the party of Lincoln and Fox News – to shut up and slither away.

But I have PERSONALLY seen it before.  The fourth estate in Traverse City is in reality its own voice.  It represents nothing of truth or seeking of the truth no matter how ugly it may be.  It seeks only to propagandize to the ideological ends of the editorial writers, and doesn’t even do so with a level of decency.  I too, have been called out as a bigot, a racist.  Not even in a general manner.  Straight up and in-my-face. The label was printed in all 500 words and pasted upon the pages of the county wide distributed paper of record.

Why? Because I consider the act of homosexuality “unnatural.”  They had no interest in WHY I might have such an opinion.  These editors had no interest in who I am personally, who my friends are, or whether knowing such a thing would effectively nullify their overt attempt at destruction of my voice and attack on my character.

It was driven by the emotional over response of those who have as a religion, a political correctness.  A political correctness that serves Koolaid as poisonous to our public dialogue, as that which was offered to Jim Jones cult followers so many years ago.  Or perhaps as deadly to the the shores of Grand Traverse Bay, as an oil slick covering, and effectively suffocating some of the resident’s opinions.

When disagreement or contradictory thought arises, these editors go for the throat.  To shut up the opposition.  This “Traverse City Neck Tie” sends a message to other would be arguers to their cherished causes that they had better silence their dissent with the new reality and ‘enlightened’ view of the hard left.

A local radio host this morning calls this editorial out for what it is. “Garbage”

WTCM’s morning voice Ron Jolly suggests the RE editorial Board should “hang its head in shame” on this morning’s show.  He called it “Massive accusation of racism with nothing to back it up”

And he is right.  The fact of the matter is that there has been NO race suggestion by any of those who have asked for the birth certificate that was only JUST released after the president’s poll numbers were falling off.  The paper’s editors were admonished by Jolly to consider their words, and implied their hypocrisy, offering this advice: “Please do not say anything about talk radio again, you are not contributing to the civil discourse and dialogue” and referring to the last line of the editorial, “Please, using your own  words, stop the nonsense.”

The responsibility of a local paper is one that is quite large, and carries with it the potential for damage to community and open debate.  The spill over of the toxic print oil from the belly of the region’s primary paper news currently has only negative effect on open discourse and reasonable differences in opinion.

Who’s pen spawned this?  One who would hide behind the policy of no byline.  Pick your favorite one from below.

My guess is if you called and asked, they might tell you.  If they won’t, maybe the publisher will