German Specialists For Our Prisons

Many of you have heard the prison guard commercials on the radio.  “The most dangerous job in Michigan” they exclaim.  No doubt, in the environment of reduced revenues by state government, there has been a real concern that the prisons will also feel the pinch from the legislature, and the governor’s best efforts at balancing our state checkbook.  They know that reinvention can touch all areas of government, and that innovation will affect them in a big way.They apparently are quite correct.

The Michigan department of corrections had been directed by the Snyder administration to develop a means in which prisoners can “self serve in the prison environment.” Wasting no time in trying to help the embattled governor balance the budget, the bureau of prisons has answered with a method that allows the limited supervision provided by a single supervisor and several dozen highly trained specialists; German Specialists.

Not the type of specialist you might expect however..

The supervisor being a trainer, and the German specialists, being Shepherds. 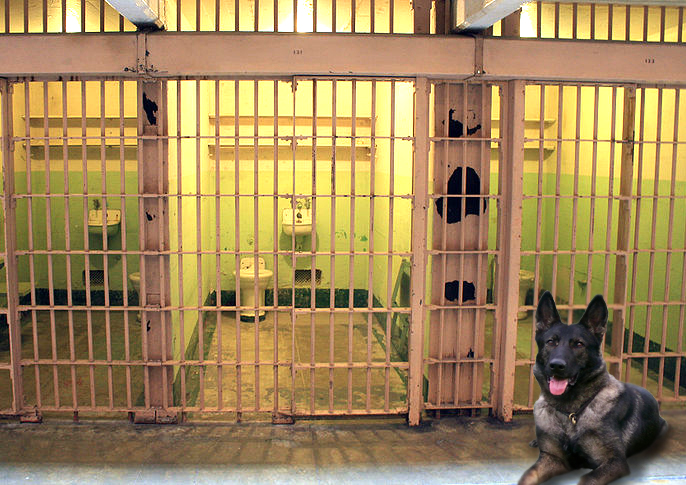 “The dogs have already been ordered” says Michigan BOP spokesman Adam Kowalski, adding “the quantity we ordered allowed us to get them at a song.”  Kowalksi notes the special training of the Shepherds which are being imported from the Bavaria region at a cost of $25,000.00 each, offers prisoners a high level of compulsion to restrain from any illicit activities within the prisons.  The dogs are especially trained for contraband detection, and retributive response to violent or unacceptable behavior by the inmates.

The shepherds are trained to disable a man in 20 seconds through a combination of ‘nip’ points up to and including the effective inner leg bite.  The trainers are expected to provide regular demonstrations by those who volunteer through non compliance as examples.  Explains Ron Chelden a newly hired unit trainer “Fear is a great motivator, and the few individuals who think they can take advantage of what appears to be less supervision, will see firsthand the denaturing ability of a very powerful, smart, and fast dog.”

The dogs will be fed a special diet that makes the food otherwise served at the prisons taste foul to them.  This apparently will prevent them from accepting ‘bribes’ for their favor.

Why shepherds?  Chelden says its widely known German Shepherds were bred specifically for their intelligence, and are considered to be the third most intelligent breed of dog, behind Border Collies and Poodles. He opines: “These dogs are likely smarter than the men they will be supervising.”