Republican Scott Brown is going to win a US Senate seat in Massachusetts today.

Despite the state being heavily Democrat, the seat 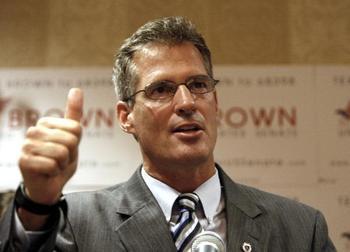 formerly held by Ted Kennedy, and all the power and money of the unions, well wishes by MSM etc.. pushing the Democrat Martha Coakley  forward, a Republican for the first time in multiple decades will occupy a senate seat in a very liberal state.  His win will be spun by both sides, but the fact remains he becomes the first shot of the new revolution.

So… What Can Brown Do For US?

Brown can demonstrate with finality that Americans fundamentally opposed to health care legislation that must be passed simply to pass “something.. anything..”

Brown can stop the juggernaut of an unchecked senate.  A body of elite and corrupted politicians which has completely lost touch with the core values this nation has thrived upon.

Brown shows that we can indeed fight back politically, against the socialist/Marxist/fascist element that is in play.  The “progressive” president, the “peoples” congress, and all the political elements that have moved into positions of power due to a sleeping public and misinformation by corporate cronies that control the media also seeking positions of power, are vulnerable.

Brown validates the tea party movement, makes it stronger, and gives more of a voice to those who have worked so hard to hold on our liberties as the varied and many organizers who have organized tea party events.

Brown can show us that even in Michigan the senators Levin and Stabenow are potentially at risk if we want them to be.

Yeah its that big…

and its only a start…

November 2010 holds the promise of reversing 40 years of progressive policy, or at the very least putting enough conservatives in play to strengthen the checks on government power which our current congress has been ignoring.  Our constitution has been under attack for so long, its been hard to imagine a way out, or a movement that could be strong enough to withstand the tactics of the left in its increasing attempts to promote policies that are decidedly un-American.

As Michelle Malkin points out,

Seemingly these folks would not band together.. not always at least.  But the point is..  OUR country is THAT important.

The Scott Brown Campaign in titling the ad below really got it right..