The Lansing Teaparty was a GREAT event!! Thanks to Joanie and Wendy (pictured below) Officials expected 50…  Officials corrected themselves when approx 300 showed up.  Just a couple of photos culled from many taken.  I had a little surprise after taking about 15 shots..  I was in an over exposure setting.. DOH!  So will be working the pictures for bast clarity and it might take me into the night.  In the mean time, here are a couple to keep you looking. (I Hope) 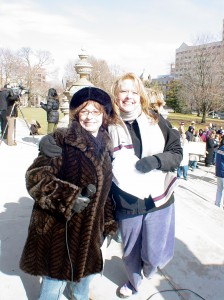 A little overexposed.. (found out too late) but still able to show the spirit these two have. Good to see you guys! 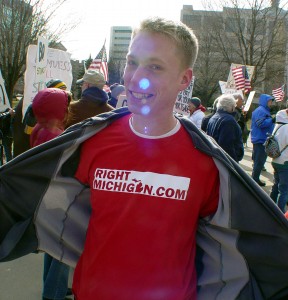 Gratuitous Nick Pic.. Hmm rightmichigan.com ..where is that? 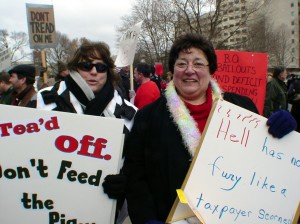 My Wife and Rose braving the cold 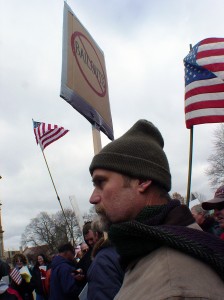 A Protester looks on during a speech at the event 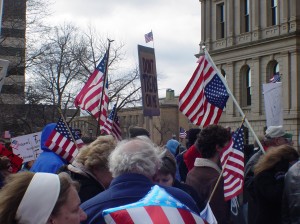 I Love flags.. Particularly American Flags. There was no shortage of these as the folks who so dearly love this country came out in droves.

Michelle Malkin Has been a GREAT HELP with the attention on these efforts by the truly patriotic folks.  She has some updates from around the country as well. 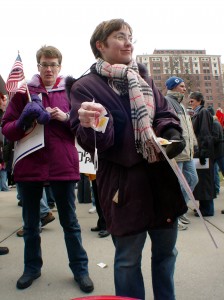 Symbolic dropping of the tea 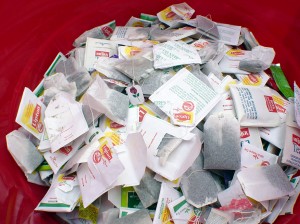 The bucket used to collect the teabags from the participants.

The channel 3 news video can be found here:

TEAPARTY NEWS With FOOTAGE of the LANSING TEA PARTY. 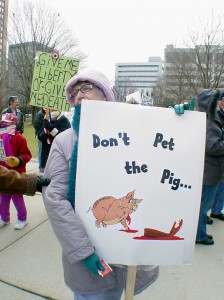 Don't Pet the Pig. Taxpayers giving an arm and a leg to the government Porkulus 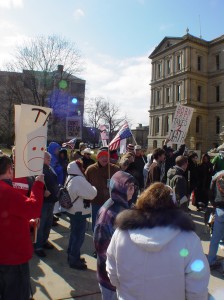 A good crowd gathers for the Lansing event.

More of a picture album from around the country at Michelle Malkin’s site is now available.  THis has been a great NATIONAL event with our local participation.  Something should be noted: The kids were great too, and they are learning a wonderful lesson in peaceful protest. 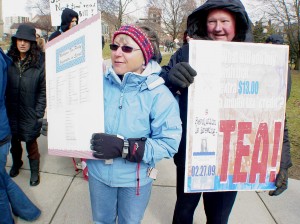 More Friendly Folks all around 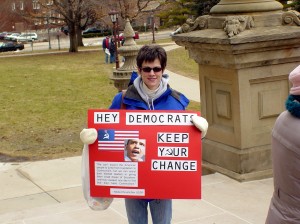 Mr President and you Democrats controlling the Congress.. We aren't buying what you are selling. 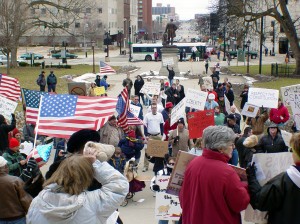 Good Crowd showing up for a cold but WONDERFUL afternoon

I was really tired after driving down from Traverse City to Lansing, then Driving back to close up the business for the day.  This is one of the reasons I broke this up into a couple day project. ( though picture clean up was needed as well.)  My commentary up to this point has been quite limited, but I felt I should add this..

These folks.. these truly great folks gave up the time, packed up their kids, made signs, and showed how much they care for this country.  Aside from the camaraderie and knowing you are with people who care as much about the country and the direction we are headed, there was no pay to be there, and no direct financial reason or reward.  The motives are pure.

And though some on the philosophically opposed side might say the signs and slogans indicate a disinterest in the people who have not provided for themselves in a responsible manner, it should be noted that the very same folks who generally fall into conservative circles are well documented as the most generous givers to charitable organizations.  There can be no doubt in my mind, the group I met in Lansing were as generous people as they come. From offering of a teabag or two if you forgot one to symbolically place in the bucket, to the most important contribution..

..their time.. for the good of our country.