Well, it seems conservatives might have a clue as to who NOT to vote for in August’s 47th District State House race.

The wary might be concerned that Democrats are being recruited by the Michigan Education Association to crossover into Republican primaries.  From Cap Con 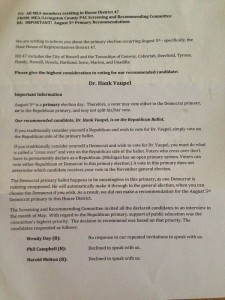 A division of the Michigan Education Association’s political action committee, which is funded in part by teachers, is urging its members to cast votes in Michigan’s 47th House District Republican primary even if they consider themselves to be Democrats.

In a letter labeled: “IMPORTANT!,” the MEA/Livingston County PAC Screening and Recommending Committee pressed union members to cast votes for Handy Township Supervisor Henry Vaupel, a Fowlerville veterinarian who is one of five candidates on the GOP primary ballot. A designation at the top of the letter reads in bold print: “To: All MEA members residing in House District 47,” then goes on to emphasize the Aug. 5 date of the primary and describe the district’s geographical location.

The letter continues with bold print: “Please give the highest consideration to voting for our recommended candidate: Dr. Hank Vaupel,” with the candidate’s name appearing in larger print at the center of the page.

Part of the explanation given in the letter is as follows:

If you traditionally consider yourself a Democrat and wish to vote for Dr. Vaupel, you must do what is called a ‘cross-over’ and vote on the Republican side of the ballot. Voters who cross-over don’t have to permanently declare as a Republican. (Michigan has an open primary system. Voters can vote either Republican or Democrat in this primary.) A vote in this primary does not determine which candidate receives your vote in the November general election.

The Democrat primary ballot happens to be meaningless in this primary, as one Democrat is running unopposed. He will automatically make it through to the general election when you can choose the Democrat if you wish. As a result, we did not make a recommendation for the August 5th Democrat primary in this House district.

Vaupel said he was aware he had received the MEA endorsement.

“I told them (the MEA) I would have open doors and we would communicate,” Vaupel said. “I told them I was interested in making education better, and though I’m a conservative, I would at least have an open door and we may be arguing or working together to make education better.”

Read the rest at CAP CON