From the You-Can’t-Make-This-Up category, we find new rules that will hog tie farming families by restricting the operation of motorized equipment to those older than 16, crushing them with even more regulatory paperwork.  In fact, it even applies limitations on how old an animal can be if being raised by minors, such as in 4H programs, and even if only feeding daddy’s prized sow, those willingly violating such rules face an $11,000 fine for doing so.

A heads up from the John Birch Society today:

Like baseball and apple pie, teenagers working on farms is part of the American way of life in rural areas, conjuring up iconic images of sunny afternoons baling hay in a spirit of camaraderie, downing the occasional soda or glass of lemonade together. Teens learn to work responsibly and earn money while they work close to home in an environment they enjoy while benefiting the small, local farmer. But the Department of Labor (DOL) is revising its child labor laws so stringently that anyone 16 and under will be forbidden from seeking employment on farms due to safety concerns.

The proposed changes to the child labor laws are based on estimates from various sources — there are no exact statistics on farm accidents or fatalities for teens. Mathematical gymnastics enabled the DOL to come up with an estimate that 613 teen fatalities occurred in almost a decade, perhaps “between 62 and 73 young workers died from injuries sustained while working in agriculture” each year with maybe one third of those deaths involving tractors. (In contrast it must be noted that 3,000 teens die every year in car accidents according to the Centers for Disease Control.)

Under the proposed changes described by the DOL as “far-reaching,” anyone under 16 will be unable to operate or tend any power-driven equipment, including mowers. Operating power-driven equipment “would include such duties as supervising or controlling the operation of machines designed to move or transport people, goods, or materials; cutting, shaping, forming, surfacing, nailing, stapling, stitching, fastening, punching, or otherwise assembling, pressing or printing of materials … excavation or demolition operations…. setting up, adjusting, repairing, oiling or cleaning a machine; starting and stopping the machine; placing materials into or removing them from the machine; or any other functions directly involved with the operation of the machine.” 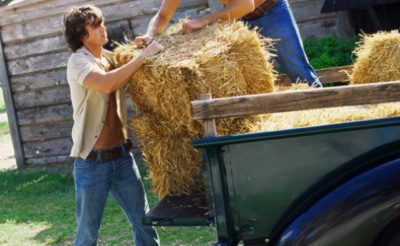 Similarly, they can’t work in yards, pens or stalls with male horses, pigs, cows or bison older than six months, sows with piglets or cows with calfs; they can’t catch or coop chickens in preparation for slaughter or market, neither can they herd animals in confined spaces or on horseback. To teens’ sorrow, operating ATVs, trucks, cars or scooters on the farm will also be forbidden.

Of course timber harvesting will be out, as will tobacco harvesting — just because it’s tobacco. Grain bins, forage and fruit bins will be off limits. The current child labor laws prohibit teens from working 20 feet off the ground or higher; the DOL wants that brought down to 6 feet. Even 17-year-olds who can enlist in the military would not be allowed to work at grain elevators, stockyards or livestock auctions.

Monetary penalties can reach $11,000 per violation if it is established that it is a willful violation.  The paperwork burden will rest on the shoulders of the farmers; it is they who must make sure that informational files are kept, certificates of tractor safety courses are sound, etc. Any “student learner” activities have to be conducted on equipment that meets OSHA’s requirements and approval.

The Department of Labor is an unaccountable, bloated bureaucracy consisting of 30 separate divisions with 16,000 employees. The Wage and Hour Division that concocted the 50-page rules has 40 chiefs and untold numbers of underlings.

Because these are regulation changes and not legislation, the Department of Labor’s website has a comment section open until December 1, 2011. But, sending an email or letter to your elected Representative and Senators is also a good idea. Let them know too much power has been centralized into an Executive Branch agency over the last decade, and more.  It’s time that Congress no longer shirks its duty but exercises oversight in this matter to protect teens’ jobs and the family farm. Then Congress needs to get serious about regulatory reform, instead of just giving it lip service in election years.

Your friends at The John Birch Society

The federal registry is quite large enough. The Obama administration picked up this ball and ran with it, in the way regulators do. Suffocation of family farms, and limiting our kids to finger paint and paste does not build a strong country, nor does it help the employment situation.

This new set of rules will destroy skill development, and would ‘necessarily’ raise the cost of doing business to the point of Out-Of-Business.