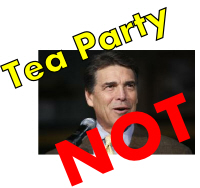 Folks, ever since there was word he was throwing his hat in the ring, I have had a really bad feeling about Governor Perry.  Something that was gnawing at me in-between my busy cant take a minute to think cycles, yet I couldn’t put my finger on it.  It wasn’t so much that Perry was reportedly once a Democrat, a similar theme with my favorite president.  It wasn’t that he is a “Bilderburg” guy as some I know are concerned.

Thanks to Michelle Malkin I now recall the unforgivable act against a free people that cannot be tolerated.

“My syndicated column today dissects Perry’s recent, so-called “walk backs” of his odious Gardasil vaccine mandate for children. I’ve written and reported on vaccine bullies in the schools and on informed parental authority over vaccines previously. But as you’ll see from my column below, Perry defenders who dismiss critics as “single-issue” activists are willfully blind to the Gardasil disgrace’s multiple layers of rottenness.”

uh.. yeah.. with so much always going on we have so easily forgotten.

By employing an executive order, Perry sidestepped opposition in the Legislature from conservatives and parents’ rights groups who fear such a requirement would condone premarital sex and interfere with the way Texans raise their children.

Beginning in September 2008, girls entering the sixth grade — meaning, generally, girls ages 11 and 12 — will have to receive Gardasil, Merck & Co.’s new vaccine against strains of the human papillomavirus, or HPV.”

That is patently absurd.

Merck had been pushing for laws requiring the vaccinations and had doubled its lobbying efforts in Texas, the Associated Press reported, funneling some of its money through a network of women legislators called Women in Government. Perry had ties to Merck through a former chief of staff who had moved on to become one of the pharmaceutical company’s three lobbyists in Texas. The Governor had also received $6,000 in contributions from Merck for his campaign for reelection in 2006.

And that is just what is available. I think this country has seen enough of that thank you.

Not for this Tea Party Guy. Likely not for others either.

Give him 2 months, and he will be back in single digits.