One of the guys who I work with got this buck yesterday at 310PM in the Upper Peninsula. 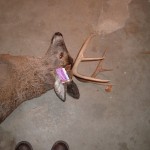 John says “shortly after the sun broke I caught the glistening of his antlers, and set up a point where I thought he would pass, and set up my shot.” Continuing, “It passed and BANG..” .. down with no chase. 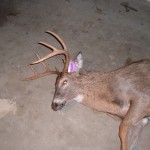 John says it may have been 165 lbs dressed and carry, but when his cart broke it turned it into 500lbs.  A 310PM kill, and finally getting out of the woods with it several hours later from the swamp.

With evidence of a large coyote population in the area, he moved as fast as he could to get his cart and then get back to his kill.  Half way through the return trip the cart fell apart because of a defective bolt, and he had to haul both manually.  Of course the thick swamp with fallen trees, and water holes made it more of an effort.

He says he earned this buck. 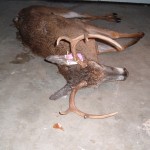 Look at the spread on those tines.