A Message from Joan Fabiano on the FAKE TEA PARTY

Tea party organizers and supporters from around the state will be in Lansing Friday, July 23rd to testify at the Michigan Board of Canvassers that no Michigan Tea Parties were involved in the submitting of 60,000 petition signatures to the state Wednesday to qualify candidates for a new third party, a “Tea Party” here in Michigan. Nor is there any attempts by any Michigan Tea Parties to establish any new third party.

The organizers of the petition drive have no known ties to any Michigan Tea Party but have ties to both the Democrat party and the Union. This is nothing more than an attempt by Liberal operatives to deliberately deceive citizens of this state, to undermine the real grassroots tea party movement to further their own agenda. This is dirty Liberal/Progressive politics at its worst!

There will also be a Rally Friday, July 23rd on the steps of the Capitol 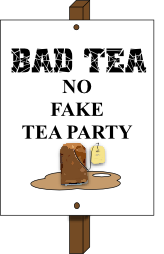 If you had any contact with a paid signature gather for this fake tea party and deceptive methods were used to try to get you to sign or IF you did sign the petition, please send a affidavit (notarized letter) should be faxed (or scanned in and emailed) to the Board of State Canvassers at:
Christopher M. Thomas
Director of Elections & Secretary to the Board of State Canvassers
Fax to (517) 241-2784 or scan in and email to elections@michigan.gov

Thank you for all you do for Michigan and our country.
Regards
Joan Fabiano
Grassroots in Michigan