These pictures are but a few out of many taken at the Saturday rally in Searchlight Nevada, home of the Senate Leader Harry Reid.  From the Massive crowds, to singular expressions of patriotism, to the flag designed by Michigander and patriot descendant Jeff McQueen, there was plenty to see.. 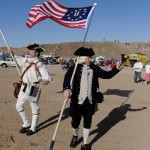 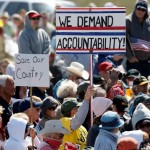 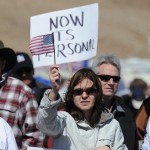 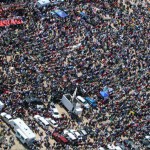 The Tea Party Express has been a great resource in acting as a beacon, to bring out folks who might have otherwise felt disenfranchised by the mad power grab in Washington.  It has also served as a good back up to the other groups that are fighting to help us retain our rights as provided for in the constitution.  The express is rolling through several states with a final destination of Washington DC on Tax Day, April 15.

In April, The Tea Party Express will be rolling through Michigan with stops in Ironwood on the 8th, Escanaba and Sault Sainte Marie on the 9th, Traverse City and Grand Rapids on the 10th, and Final Stops in Lansing and Detroit on the 11th.  Michigan Patriot Joane Fabiano will be riding with the Tea Party Express during its tour of Michigan:

The national tour will have six stops in Michigan over a three day period: April 9 in Escanaba and Sault Sainte Marie; April 10 in Traverse City, Grand Rapids and Lansing; and then to Sterling Heights on April 11.

Fabiano, who lives in Holt, said besides being a speaker, she will be on the Tea Party Express bus doing a daily blog as well as other social networking activities.

The recent passage of the federal health care reform bill will spark more of a crowd than the past stop by the Tea Party Express, Fabiano said.

Official Stops of the express: