A few years ago when talk of draining the dam ponds along the Boardman started, I openly wondered about the value of the shoreline properties and discovered that the plan was not to honor any riparian boundaries that were generally accepted by the land owners for MORE THAN A CENTURY.  I was concerned that our local government had not considered all of the negative aspects in its bid to return the river basin to a PRE-1900 condition.

Traverse City’s “River Rich” shore dwellers are now finding out first hand that government can do as it pleases with regard to property rights, land value, and assignation of new uses of space between a former waterfront home, and the receded water line.  The Mackinac Center has started a new series on just this issue just in time for Halloween:

In Grand Traverse County, elected officials and bureaucrats are using every tool in their arsenal to usurp the rights of property owners who own land on the dam impoundments. These homeowners have lost a large portion of waterfront due to the drawdown of the water – up to 15 feet in some places, with plans to drawdown even more – in preparation for removal of the dams. The drawdown has moved the shoreline more than 100 feet from the docks the landowners built for mooring watercraft and viewing nature.

Except this is not a Halloween horror flick, and it may only be a start of another troubling issue.  There are more than just a few hundred folks along the river’s shrunken boundaries who will be affected, and in a harsher manner.  There are whole settlements along the aquifers which might be affected as well.

What about the water directly surrounding the dam basins, or even down stream from them?  The following picture is a generalized view of Michigan’s water table which feeds into the great lakes surrounding the lower peninsula.  It demonstrates a top down flow of water from center out. 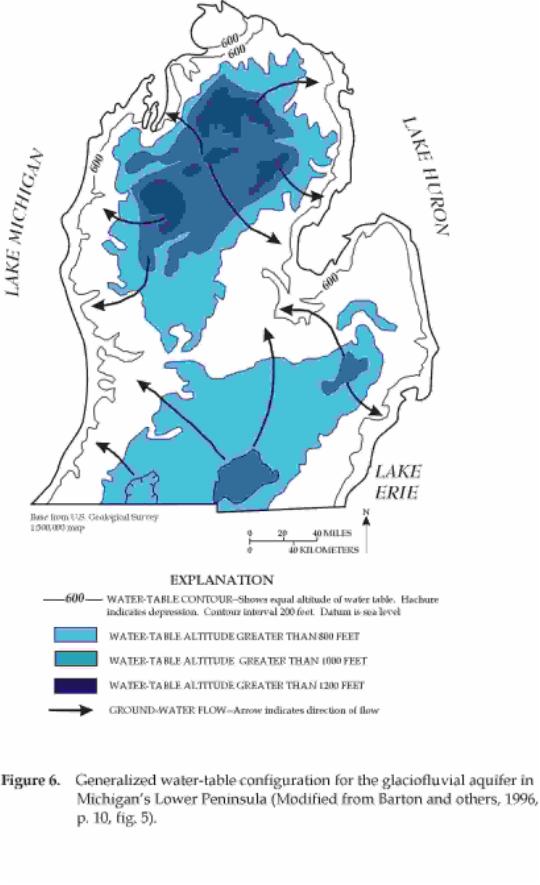 Understandably, the water flows from the higher point to the lower, through porous rock and stone known as the aquifer.   If you were to look at the high points in a cut away fashion, the water flow would appear as a dome. (assuming consistent porousness)

Gravity and flow draws out the water in a dome fashion from the source.

So where does that leave the distant land owner who for decades has had a decent water supply, and now has a higher mineral content because of lower levels and saturation?  What about the levels themselves?  A drop of 20′, which even now those who are downstream but away from the basin itself might find they have been completely cut off because of higher aquifer paths.  Some of these aquifers may be lost already, but not yet have been noticed.

The water system which the entire area relies upon is now potentially threatened.  The wells which provide water to the city and township water supply in fact might be jeopardized because of a lack of consideration for these possibilities.  Never mind the poor souls who trusted our leadership to protect their private property concerns.

It merely drives home the point that a few in positions of power can screw it up for everyone.