Between Michael Vick, The health care debate, Clunkers for Cash, and the latest episode of Dancing with the Stars, the public has had its attention turning on a dime.  In fencing, there is a Parry, a turn, a dodge and a thrust. In politics, its a parry, a poo fly, a “look over there,” then an “I’ve been screwed again.”  So with that in mind, look around at presumably defeated legislation, which unlike a legal case determined “with prejudice,” can all too easily, and will likely resurrect itself in some manner.

Cap and Trade may well be presumed dead in the Senate, but the way things work in Washington, is that not unlike a virus that mutates to find a willing host of least resistance.  Bloomberg Reports:

Cap-and-trade legislation to limit U.S. carbon dioxide emissions has “gotten out of control” and needs to be scaled back in Congress, said former Democratic Senator Timothy Wirth.

“The Republicans are right — it’s a cap-and-tax bill,” Wirth, a climate-change negotiator during President Bill Clinton’s administration, said in an Aug. 14 interview. “That’s what it is because they are raising revenue to do all sorts of things, especially to take care of the coal industry, and it makes no sense.”

Hopefully Waxman Et al..  Fall on their own swords and soon.  But the reality is that these guys are deadly serious about extracting your liberties.  Imagine an entire US that mirrors the economy of Michigan. But my opinions as well reasoned though they may be, might well do with a dose of “official proof.”

In a letter to the Energy Information Administration, Waxman and Markey asked for an economic analysis of HR2454. They asked and they received. 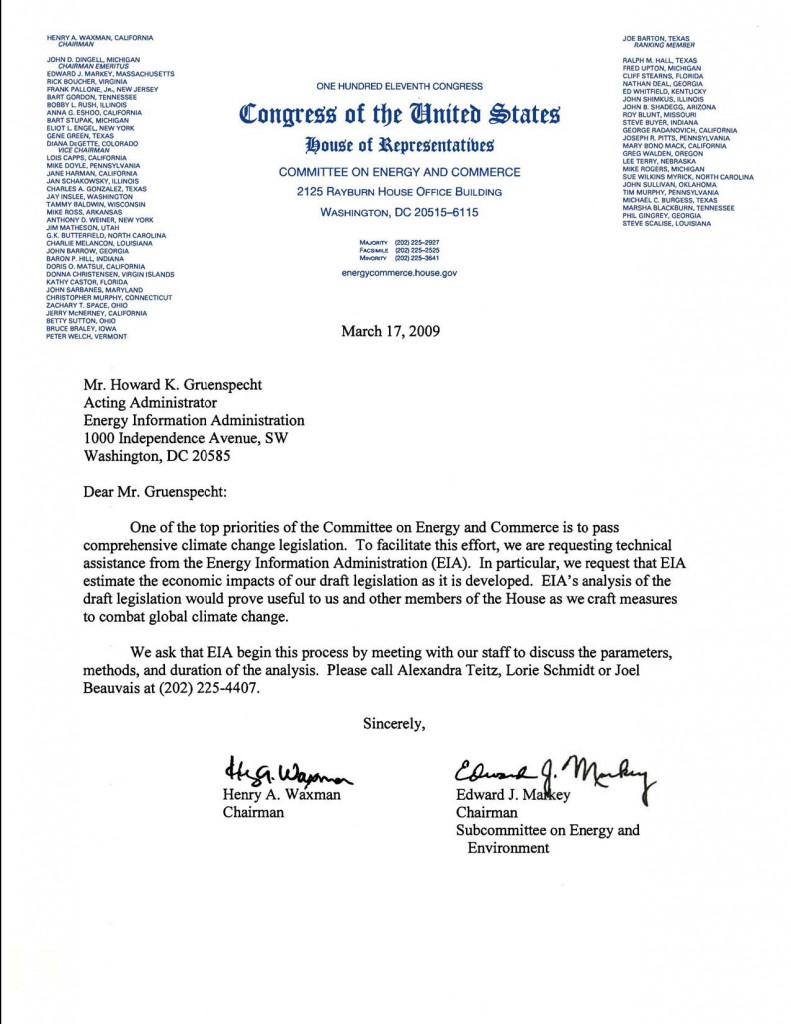 The report has been released and can be found at the EIA Site. During a cursory look at the report I was able to quickly find the “estimated” cost variations based in 2007 dollars for the next 20 years.

The sample chart below which I extracted from the report is somewhat revealing. I would expect that the numbers are as accurate as possible, and would not be affected by political whim.

Click on this chart to see the cost increase of energy with the implementation of HR2454 as it was drafted.

Of course having said that, this is a black and white picture of the cost of energy that cannot take into account other costs such as unemployment, manufacturing costs increasing and world takeover of our production as we slip into third world status and poverty. But even as a cut and dry analysis, it still shows a nearly doubling cost for our energy needs in a fairly short time frame.

Look at the chart, and look at the source for the remainder of supporting information.  Static baseline 2007 dollar costs are used.. Waxman will not likely give up on this, and may yet resort to underhanded measures to see it through to the POTUS pen.  Assume inflationary periods upcoming [that MUST] with the current spending of money that doesn’t exist yet, and ask yourself, “do I really want $20/gallon gas?”