The left decries the conservative viewpoint that LOGIC should have some bearing in the decision making by our elected leadership.  “Reason” is overrated as it applies to public policy apparently and “feeling good” about what has been done is sufficient to clothe us, heat our homes, and feed millions.  While the liberal brain cells slept, their advocate for an oligharcic liberal-fascist coup signed a spending bill dressed up and exclaimed to be a “stimulus” which obligates the citizenry to a generational mortgage.

This image (click to see more fully) which I found pretty much lays it right out there. 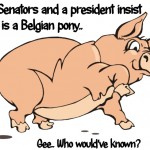 We all want a pony, but some of us have standards..

Of course the point is..  We can make it what ever we want right?

Not unless the pig has a hell of a lot of plastic surgery.  And frankly over a thousand pages of new long term programs set the stage for EXTREME expansion of government.  Considering the health care provisions alone totaling nearly $200 Billion will become baseline expenditures as future budgets are brought up for a vote, I can see the headlines now: “Republicans stripping the poor of needed funding” when the upcoming spending battles are waged.  Not because they will even likely be calling for reductions, but as always because they will not support further increases..  sigh..

Then there are the emails..  SOMEWHERE, SOMEHOW… I was placed on the progressive mailing list which is sent out to all the special $5 supporters who somehow raised a half a $billion to elect the new communist in chief.  Its all “thank you for making this a reality!” and “we couldn’t have done it with out you..” Uhh.. Look..  Do I look Russian? Chinese?  Because THAT is where your money is coming from.  Even Soros perhaps..

This part supposedly from “Sen Bob Menendez” (I wonder if these guys have any clue as to what is sent in their names) Talks about:

Of course there is nothing like the incentive to stay unemployed and working cash jobs like a 65% pimp on the ol health care costs..  As to the digitizing of records.  It is a part of a MAJOR infrastructure upgrade designed to track sickness and disease, but also gives the feds unprecedented power over you in unintended ways and generally violates your privacy.  Don’t take MY word for it though.. Just read the lines AND between them.

Education: Our recovery plan provides $39.5 billion in direct aid to local schools so they can modernize facilities and prevent teacher layoffs.  It increases Head Start funding by more than $2 billion and expands tax credits and Pell Grant funding to make college more affordable.

Code words for “pay off” to Education unions for rallying the troops.  Lets throw more money their way to continue the great job (see Detroit) they do.  And as to the Pell grants.. they are useful if the students are truly held accountable.  I have personally witnessed the abuses the system takes when money is free but for some paperwork beforehand.  It is a tragic waste of taxpayer dollars, and should be handled differently.

“Senior Menendez” Touches lastly but certainly not leastly on:

Energy: The bill will create jobs and address the environmental and national security implications of importing foreign oil.  It provides $4.5 billion to make federal buildings more energy efficient, $11 billion to modernize the country’s electric grid, and additional funding to double the production of renewable energy,

Yeah..  the Grid.  General Enormous is certainly wetting itself over this monster of a boondoggle which seeks to track our INDIVIDUAL use and have the government better mentor us on how best to modify our electrical needs to meet carbon emission standards..  I am not making this up, and again I refer to published historical reference for back up.  Though it speaks to the benefits only, consider what happens when you have been “discovered ” to be outside the accepted level of electrical use” you rotten techno junkies!

So I guess I am just wondering how this will create 3.5 million (claimed to be the result) new jobs?  And IF that goal is met, how can spending a quarter of a $million PER JOB be considered even remotely reasonable a cost?  And then..  What is the end game?  What will be the point in which we can say “Our Job here is done, now we can rest.” ?

Yes.. my hair has risen on the nape of my neck, it is very stimulating.. truly so

← Please DO elaborate Madame Governor..
Can you imagine? →