This weekend, protesters staged outside of the Carmike cinemas in favor of the showing of Kevin Leffler’s film “Shooting Michael Moore.”  Leffer himself was present wearing tape over his mouth symbolizing the censorship aspect.  It seems that after it was announced the film would show here, in the area where Michael Moore takes up residence, Leffler’s film was canceled by Carmike officials.  Even after Leffler offered to change the title of the film, which merely chronicles Moore’s rise in success, and the hypocrisy surrounding his political positions as presented in his own (Moore’s) films.

Sunday’s local fish wrap, the Record Eagle had a full page ad taken out by Leffler asking the public to make contact with the Carmike organization and encourage the showing of the film. (The ad is shown below – click for full size.) 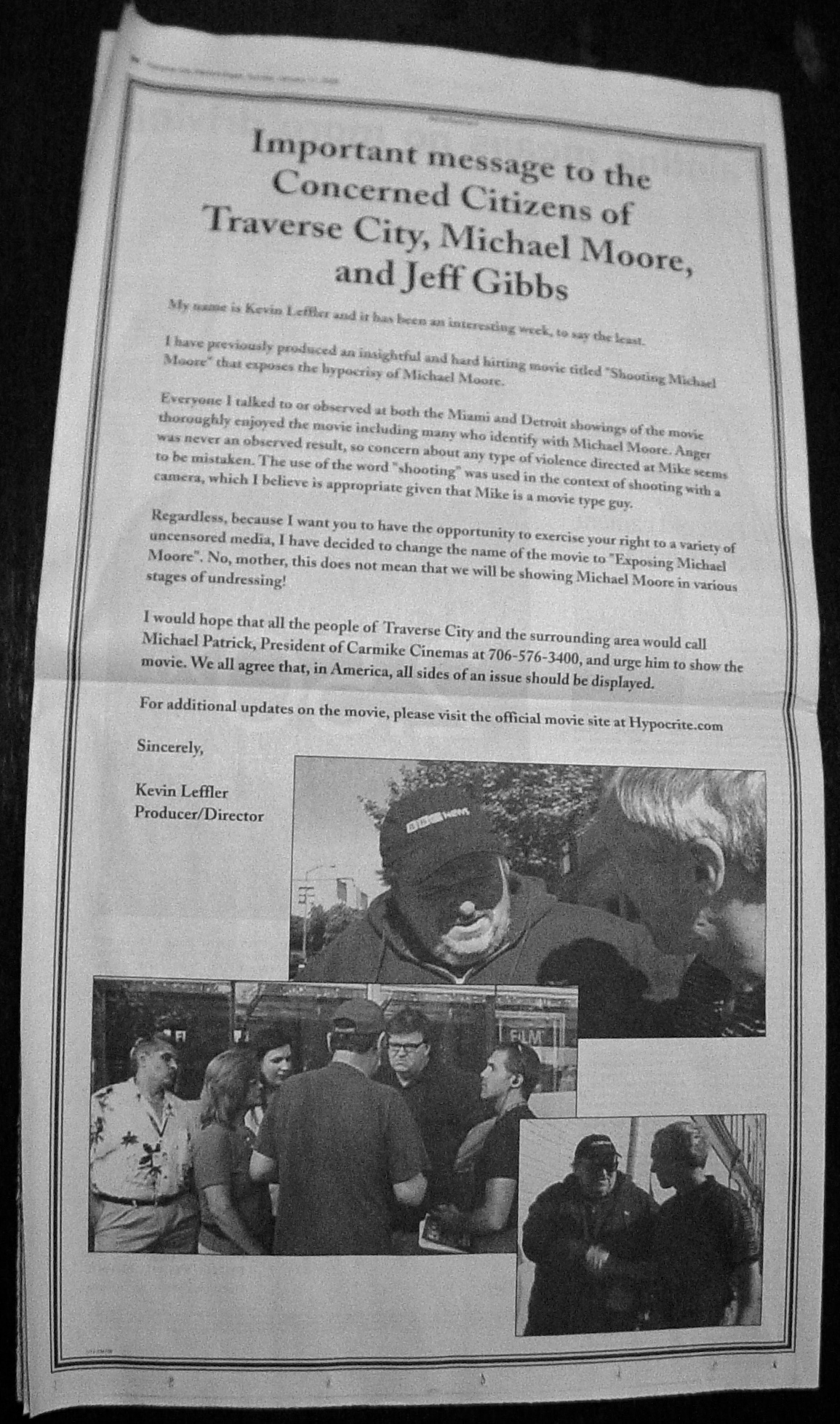 Leffler explains how even Moore supporters who viewed the film in other venues did not have a problem with the film’s production, yet for unknown reasons, the theater group still resists the showing as was planned originally to begin on Friday January 9.  As the Reporting by the Record Eagle explains, even the marketing director for Carmike is unsure why the film is not being shown.

“I wish I had a concrete, definite idea or a reason. I have no idea,” he said.

My speculation would be that Moore is a favorite of the film industry left, and the powers-that-be in management acting on a call or request to “can” the showings easily trumps the minor profits the film house would make for the week long run it was to have. It might have been Moore himself for all we know who made a call to “appropriate persons” to guarantee its withdrawal.

The Horizon Cinemas under Carmike management showed Farenheit 911 a couple of years ago yet even in the face of a protest of the time, did not back down.  It seems sometimes censorship merely needs a “certain kind” of friend to help it along.  And as we know, the current incoming administration is the right kind of friend to the Congressional leadership which has indicated an eagerness to implement the fairness doctrine rules on talk radio and god knows what else..

A question to consider..  how long did it take Hugo Chavez to shut down the free press?

← Some comments made at an Outside Lansing site debate..
We all handle things differently… →