Moore in his “Bowlers for O-Who” adventure last night drew at least 22-25 people from the Traverse City area.  Watching the bowlers in the background, I saw an all too familiar (yeah it happens to me too) sight.  A split, and though it was not a 7-10, it still.. was funny and easily distracted me from Moore’s insipid comments on McCain, Palin, and civilized people everywhere.

–verb (used with object)
1.    to divide or separate from end to end or into layers: to split a log in two. Or even a PIZZA..
2.    to separate by cutting, chopping, etc., usually lengthwise: to split a piece from a block.  Give me that bullhorn Michael.
3.    to tear or break apart; rend or burst: The wind split the sail. Moore split his pants on that last throw. 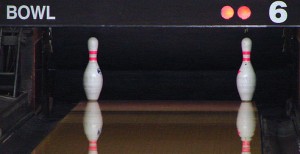 Doh! I knew I should have had the bumpers installed!

4.    to divide into distinct parts or portions (often fol. by up): We split up our rations. We split up our NATION with misleading hyperbole, racial suspicions, and and class envy.
5.    to separate (a part) by such division.  Can you say DETROIT?
6.    to divide (persons) into different groups, factions, parties, etc., as by discord: to split a political party. As in #4, but is different, but that of course depends on your definition of “is.”
7.    to separate (a group, family, etc.) by such division.  Can you say Hillary voters for McCain?
8.    to cast (a ballot or vote) for candidates of more than one political party. As Chicago politics will teach you vote early and often, and maybe throw a few votes
9.    to divide between two or more persons, groups, etc.; share: We split a bottle of wine. Or as  O-Who and Biden did after Palin’s speech, 4 bottles…
10.    to separate into parts by interposing something: to split an infinitive. Allow me to interject here: Granholm Wrecked Michigan. .. OK ..Carry on..
11.    Physics, Chemistry. to divide (molecules or atoms) by cleavage into smaller parts.  Cleavage..  Is that a Sexist remark?
12.    to issue additional shares of (stock) without charge to existing stockholders, thereby dividing their interest into a larger number of shares and reducing the price per share. Something which will happen to Nancy Pelosi’s CLNE stock after passage of Prop 10 in California passes and it increases 100 fold.
13.    Slang. leave; depart from: Let’s split this scene. What most of the Bowlers said after finding out that they were going to be on Larry King.  Yeesh.

–verb (used without object)
14.    to divide, break, or part lengthwise: The board split in half. String cheese ..YUMMMM!
15.    to part, divide, or separate in any way (often fol. by up): The group of children split up into two teams. We’ll split up here and meet later.  The group of children split up, went to never never land came back and formed the democrat party.
16.    to break asunder, as a ship by striking on a rock. Can you say O-who’s political aspirations the night of Palin’s speech?
17.    to become separated, as a piece or part from a whole. Becoming on occasion…  “a Maverick”
18.    to part or separate, as through disagreement; sever relations: They split up after a year of marriage. He split with the company after a policy dispute. Ahh Lieberman, a man we hardly knew ye…
19.    to divide or share something with another or others; apportion. OK here give me that paycheck, Ill give it back in a week, ok maybe a year, umm ok maybe just a little part of it.. What?  no its ok I’m From the government I’m here to help you.
20.    Slang. to leave; depart. As the money spent to fill my gas tank departs my wallet..

–noun
21.    the act of splitting. Maybe what O-Who had to do when Rev Wright started hurting his chances?
22.    a crack, tear, or fissure caused by splitting.  O-who bubble maybe not have popped, but split
23.    a piece or part separated by or as by splitting. Hairs, Hairs, Hairs
24.    a breach or rupture, as between persons, in a party or organization, etc. Lieberman, Hillary Voters etc..
25.    a faction, party, etc., formed by a rupture or schism. Or Personality?  Mr O-Who, meet Mr O-Who
26.    an ice-cream dish made from sliced fruit, usually a banana, and ice cream, and covered with syrup and nuts. Or several hundred? Yummy! huh Michael?
27.    Also called, especially British, nip. a bottle for wine or, sometimes, another beverage, containing from 6 to 61/2 oz. (170 to 184 g).  Let the drinking begin! 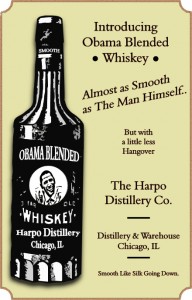 28.    a bottle, as of soda, liquor, etc., which is half the usual size. OK why bother then?
29.    a strip split from an osier, used in basket making. Some “community organizing” activities include lessons on basket making.
30.    Masonry. a brick of normal length and breadth but of half normal thickness, used to give level support to a course of bricks laid over one not level.  Foundation is the key to long term success of any program. Each layer the global warming crowd placed, brought their socialist plans ever closer to completion
31.    Often, splits. the feat of separating the legs while sinking to the floor, until they extend at right angles to the body, as in stage performances or gymnastics. OW! or at least that is what Joe Biden said after finding out his counterpart was a woman who was a better man than him.
32.    Bowling. an arrangement of the pins remaining after the first bowl in two separated groups, so that a spare is difficult.  Oh sure.. we start the Bowling thing again.
33.    Philately. bisect (def. 5). say what?  is that a swear word?
34.    one of the layers of leather into which a skin is cut. Some skin is thicker. hello McFly!!
35.    the act of splitting a stock.  Again.. Pelosi benefits from this.

Tomorrow we examine the word PORK..  or not.