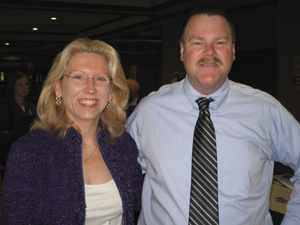 I feel priviledged to be along with the delegation of Michigan Republicans for this the second day of the Republican National Convention. The camaraderie, the sense of movement forward this election cycle is evident by the positive conversations held through out the Michigan delegation, as well as the national scene.

Land invited her Minnesota counterpart Secretary of State Mark Ritchie, a Democrat, to the breakfast held for the Michigan Delegation, and after a not so brief conversation with him, it was clear he was impressed with the way in which Land has run the office she holds, and is on the way to emulate the process.  It should be pointed out, that Minnesota’s SOS currently operates elections and other functions, but not licenses etc.  Land has been assisting Ritchie with suggestions to help him enhance the efficiencies of Minnesota’s system and perhaps joining the DMV with their SOS to further enhance and improve efficiency on those operations. 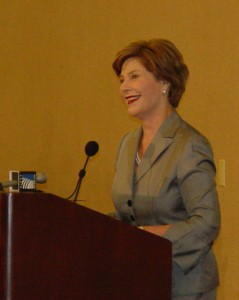 There was a Pleasant surprise!  It was “hinted ” because we lost our guest speaker Haley Barbour due the storms, we would have a “special appearance.”   Before long, and to great cheering we were graced with the presence of none other than the first Lady! Although for some it was a surprise, the increased Secret Service contingent somewhat gave it away.  Laura Bush is a class act and is quite popular.  She spoke to the fact that Michigan stands to be a major player in this election, and will likely be a decider of who will win.

Michigan is truly a unique state, and what Lady Bush said is likely true.  Combined with a distrust for Democrats as the ones to destroy Michigan’s once bulletproof economy, it is no doubt a motivator for looking at the conservative choices and voting Republican this time around.