I have written much on A-21 and the possible motives behind it.

Even the widely accepted motivations based on the Rio declaration stand up front however, as we see federal grants being used to ‘shape’ our communities. Much of the shping of course, is done through political efforts and our own money used against us.  As Robert Romano of Net Right Daily points out, political gerrymandering is being done on a subtle scale. 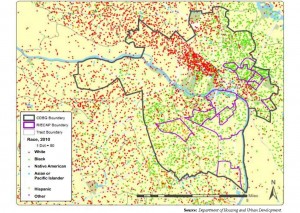 Let’s just be blunt. If Congressional Republicans do not defund the imminent rulemaking, “Affirmatively Furthering Fair Housing,” by the Department of Housing and Urban Development (HUD) in the upcoming continuing resolution, they are utterly insane.

The rule, now delayed into December, is nothing short of a national, government-directed gerrymandering regime to redraw the zoning of every single neighborhood in the U.S. on the basis of race and income that accepts any portion of community development block grants.

Conditioning those grants on rezoning will generate obvious political outcomes, namely, to turn what were once Republican districts — which tend to be higher income and white not because of racism but rather economics and regional demographics — into marginal, purple districts under the guise of providing “fair housing.”

One need look no further than HUD’s unleashing its “Affirmatively Furthering Fair Housing Assessment Tool,” with comments due by November 24. HUD has also released template racial rezoning maps and data tables to be used in each community development block grant recipient area.

The tool’s worksheet orders the assessing bureaucrat using the maps and data to “identify neighborhoods or areas in the jurisdiction and region where racial/ethnic groups are segregated and indicate the predominant groups for each.”

Read the rest at NetRightDaily.Com

← One Last Chance To Get It Right GOP
Tom DeWeese ~ Successes in Rejecting Agenda 21 aka Sustainable Development →
Loading Facebook Comments ...