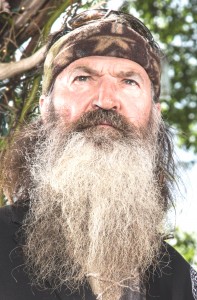 Given they will not likely print it, I am making it available here by permission.

Is Phil Robertson A Prophet?

The question might seem absurd, as Phil never claimed to hear from the Lord and he never levied a warning. Yet if we take a closer look at prophets we just might have to give pause.

But what is a prophet? One dictionary says this: a person regarded as an inspired teacher or proclaimer of the will of God. And OT prophets were just ordinary persons who had received and delivered the Word. Some were from a priestly tradition, but some were common folk and most were reluctant to deliver the messages they received. Why? Because they knew their contemporaries didn’t want to hear it. Furthermore, I don’t believe there any writings the spell out qualifications for being a prophet. So we haven’t eliminated Phil yet.

The second question goes to “hearing the Word.” Again returning to the Old Testament prophets we find that some of them had visions, but others just claimed they were delivering the word of the Lord. One thing for sure is that they did not look it up in the bible. Theirs was an oral tradition and for most of them, the only way they could receive the Word is if it was spoken to them, either directly or through a vision. We do have a bible today and many other books on the same subject, so we don’t need to hear the Word when we can read it. Now, Phil claims to spend time with the Word and some claim one can be inspired by it. So again, Phil fits the definition.

But another question surfaces. Was Phil delivering the will of God? Being a student of the bible it seems clear to me that Phil was. I have heard the argument that Jesus never said anything about homosexuality, but I beg to differ. What Jesus did say was: “Do not think that I have come to abolish the Law or the Prophets; I have not come to abolish them but to fulfill them.” (Matthew 5:17) And scripture is very clear on it’s stance with homosexuality, regardless of how one might feel about it. Another thing Jesus was clear on was this: “You shall love your neighbor as yourself.” (Matthew 22:39) Again Phil was right on with this, so yes, we’d have to say Phil was expressing the will of God.

But whether Phil is a prophet isn’t really the question that should concern us. The question should be: why is it that this common man is the one who is proclaiming the will of God when tens of thousands of trained theologians, deliverers of the Word, are so silent about God’s will? Why is it that so many of our pulpits are filled with “feel good” theology and one never hears the word “sin” or the call for repentance from it? Perhaps political correctness has won, which means that whether Phil is one or not, it seems that we once again need a prophet.