Yes, it is a tax. (Reposted from Net Right Daily) 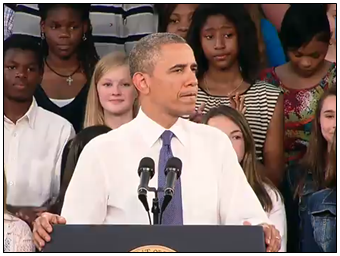 What’s a president to do when he wants to implement an ambitious five-year program to provide high-speed Internet access to every single school in America, but lacks congressional support or funding?

Apparently, in the case of Barack Obama, it is to just assume the authority to raise taxes to fund the program into existence, and then just arbitrarily spend the money to implement it.

Under the 1996 Telecommunications Act, Congress outsourced to the Federal Communications Commission (FCC) the power to tax telecommunications carriers a “contribution” to help provide so-called “universal service” for underserved consumers.

So, Obama’s new plan to fund ConnectEd — a program that he unveiled in a June 6 speech without explicit congressional approval — is to have the FCC raise fees on cell phone users to raise anywhere from $4 billion to $6 billion to pay for the program.

Leaving aside the fact that up to 94 percent of instructional classrooms already have Internet access according to the Department of Education, the Obama plan — and the 1996 Telecommunications Act for that matter — has a big problem.

Namely, Article 1, Section 7 of the Constitution, which states, “All bills for raising revenue shall originate in the House of Representatives.” Congress cannot outsource its taxing power to the FCC — or to any other agency. Yet, in 1996, that is exactly what it saw fit to do.

As for ConnectEd, Congress never explicitly authorized the program, instead giving the FCC unilateral authority to change its mission and services offered arbitrarily. For example, it defines the concept of universal service as “an evolving level of telecommunications services that the Commission shall establish periodically under this section, taking into account advances in telecommunications and information technologies and services.”

Meaning the agency can set whatever policy goal it likes, create a budget for it, and then fund it with increased cell phone user fees — all without any vote in Congress. Pretty neat racket.

Except it’s brazenly unconstitutional. In this case, Congress has ceded not only its taxing power, but its legislative powers as well to an agency of unelected, faceless bureaucrats. It’s not the first time.

Congress has created $2.2 trillion of so-called “mandatory” spending programs that operate on autopilot without any annual appropriations votes in Congress.

The Environmental Protection Agency in 2009 implemented the “carbon endangerment” finding, essentially rewriting the Clean Air Act without a congressional vote to define carbon dioxide — a biological gas necessary for the very existence of life — to be a harmful pollutant regulable under the law.

Government Sponsored Enterprises Fannie Mae and Freddie Mac and the Federal Reserve — whose administrative control of housing finance and low interest rates policies helped cultivate the housing bubble that almost wrecked the global economy without any vote in Congress.

Then there’s the Fed’s quantitative easing programs, which because such policies are not subject to congressional authorization, clearly abrogate Congress’ constitutional power to coin money.

In that context, if the proposed FCC cell phone tax is implemented without congressional approval, it will just be the latest in a long line of usurpations of the executive branch taking on legislative authority. Fortunately, there is still a way that Congress could fight back.

Obama has two nominees to fill positions at the FCC: Tom Wheeler and Michael P. O’Rielly. To register their dissatisfaction with the proposed FCC cell phone tax, members of the U.S. Senate might consider blocking Wheeler and O’Rielly through the use of a Senate Rule XXII filibuster.

The proposition on Wheeler and O’Rielly would be simple: any vote invoking cloture is a vote to raise everyone’s taxes.  Pure and simple.  No “I voted against him on final passage.”  No, “I made a deal and they promised not to….”  Invoke cloture and you are for taxes.  Oppose cloture and you are standing with the American people.

The last thing cell phone users need is another tax on their bill that they have no idea where it came from and that their representatives will claim they did not vote for. To stop it, the American people will need to tell their representatives to block Wheeler and O’Rielly, but also to defund in the FCC and eliminate its unconstitutional taxing and legislative authorities.