While Dick Durbin the senior senator for Illinois uses the Obama administration’s EPA to beat up on Ludington’s SS Badger, costing Michigan jobs, Michigan Senators Stabenow, and Levin sit idly by and mind their place.

The SS Badger, a coal fired ferry has just received its last reprieve from the Obama administration and a deal brokered between the EPA with the Justice department and the ferry company.  But still it must replace its engines in two years or be done.  In the mean time restrictions have been added so that the hammer of government is felt and appreciated.  Coal fired, is the line that crosses the political hairs of president Obama, who’s EPA has directed the greatest assault on energy production and other use of the fossil fuel. This administration has been gunning for the up to 900 jobs (200 directly and 700 indirectly) affected by this recent development. In a January 2008 Interview, Obama said:

“Under my plan of a cap and trade system, electricity rates would necessarily skyrocket. Even regardless of what I say about whether coal is good or bad. Because I’m capping greenhouse gases, coal power plants, you know, natural gas, you name it — whatever the plants were, whatever the industry was, uh, they would have to retrofit their operations. That will cost money. They will pass that money on to consumers.“

And he is making good on his promise.

The decision to allow the ferry the small window of continued operation is not good enough for Durbin however, who (with nary a peep in opposition from Michigan’s US Senators) would like to see those jobs lost permanently.

“The SS Badger, the filthiest ship on the Great Lakes, has been given two more years to dump hundreds of tons of dangerous coal ash into Lake Michigan .. The millions of people who live, work and play in and around this beautiful Lake should be outraged that this filthy ship will continue to operate.”

.. To the Lake Michigan Carferry Service which has a lengthy history of seeking loopholes and political fixes to avoid cleaning up their spewing vessel, I have four words: Stop Badgering our lake!”

Says the guy who blocked some fixes we would have had for another environmental (and more pressing) issue; the Asian carp threat.

In 2010, Dick Durbin attempted to play both sides of the Asian Carp debate by acknowledging the threat, yet not willing to have Illinois accept responsibility for its part.

“Let’s acknowledge the obvious,” he said at the beginning of Tuesday’s two-hour hearing. “The Asian carp and other invasive species are a real threat to the future of Lake Michigan and the Great Lakes.”

But Durbin and the state and federal agency allies he assembled Tuesday pointed out there could be drastic consequences if Michigan is successful in court. Closing the navigation locks could unleash widespread flooding in the Chicago area, and it would put a big dent in the barge industry that moves so many of the raw materials that make this industrial hub hum.

As usual, the lefties exist in a state of perpetual cognitive dissonance, and must rely on the low information voting type to maintain a facade of representation.  The REAL issue Durbin was worried about, was merely the economic impact on movement of goods by barge for HIS constituents.

Hired by the Attorney General’s office, John Taylor, professor of supply chain management, explained the true nature and cost to Illinois industry was minimal, in comparison to the real effect Asian Carp can have on the great lakes. He notes the impact would primarily be with the O’Brian lock closure. His study concluded that the primary impact would affect less than one percent of the trade moved around in the Chicago area. Further, that does not mean eliminate but require a different transport method (the equivalent of a couple of train loads) to move the cargo displaced by the closure of that lock.

Nope.  Durbin didn’t “carp enough” on the issue of that particular invasive species, like the ‘Badgering’ he is doing on our state’s economy now.  His concern over the great lakes now serves his position more than as an errand boy on the president’s mission to destroy the coal industry and take with it [ultimately, thousands of] Michigan Jobs.

And our elected heavyweights stand mute.

Stabenow, who has publicly stated that she “Feels global warming” when she flies, has yet to defend these Michigan workers who are facing an emergency not of environmental need but one of a political nature, based on an ideologue’s misguided mission to destroy the energy industry and all things connected to it. The SS Badger and the jobs that are related to its operation have become collateral damage.

This is not the first time Obama has attacked our coal fired jobs base without repudiation by Stabenow or Levin however. The president’s effort nearly led to the closure of the Marquette power plant, a move that was barely avoided through promises of upgrades and a purchase by We Energies with Wolverine power to make it happen.  Without the deal, the entire upper peninsula of Michigan would have faced rolling blackouts, and any industry that uses electricity would have been destroyed.

Michigan’s US Senators were silent on that.

Yet the presumed danger of coal ash in the great lakes is not necessarily partisan either. The drive to destroy coal by the president and his administration overrides previously established EPA standards and accepted levels of heavy metals and mercury.  It was in 1993 that the Clinton administration EPA that found coal ash and other fossil waste non hazardous. Saying in August of that year, that

“Based on all of the available information, EPA has concluded that regulation of the four large-volume fossil-fuel combustion wastes as hazardous waste under RCRA Subtitle C is unwarranted”

“In today’s action, we are determining that regulation of fossil fuel combustion (FFC) wastes under Subtitle C of the Resource Conservation and Recovery Act (RCRA) is not warranted.”

And in fact, he ground we walk on could be higher in heavy metals. The chart below demonstrates the range in either material.  Presumably the coal used, will affect the outcomes of the ash. And the calculated mercury effect to the lake by the SS Badger over an entire season is less than an ounce. 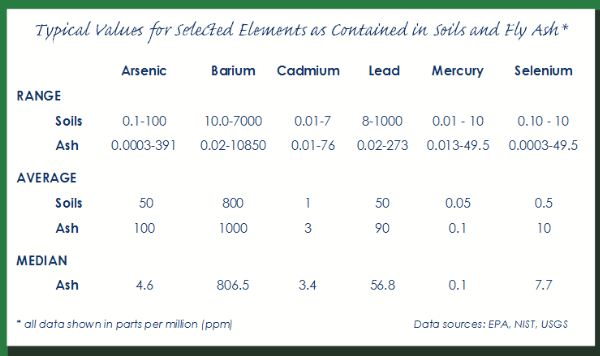 Times change I guess.  Democrat Bill Clinton’s priorities were not the same and as purposefully destructive to the economy as Democrat Obama’s, and the data didn’t present a problem back THEN.

Reality has become a product of who resides at the top of the heap.  A place at the table for sycophants and wannabe leaders requires that no amount of conflict be allowed in the ranks.  Dick Durbin’s mission to destroy a part of Michigan’s economy is to please his master, Barack the first.  And Debbie Stabenow and Carl Levin know their place, and won’t say a thing.

Just waiting to be appreciated by the one who truly matters to them.