Things are looking brighter in our great lakes state. Unless, of course, one wants to use a light bulb to make it so.

A demand for engineers in Michigan:

“Andrew Watt says he figures the shelf life of an auto engineer looking for a job in Michigan is about three days. Companies that wait longer than that will have to get back in line for the next candidate.

“If their skills are even on the edges of automotive, they can get a job,” said Watt, whose iTalent LLC in Troy finds engineering and information technology workers for companies in nine states. “There’s an extreme shortage. There’s way more demand than supply.”

This might be true, but if 25×25 is approved by voters, we can kiss Michigan manufacturing goodbye

The long term effect of our emerging technical interaction with each other will continue to create demand for such things as better engineered automobiles, heavy equipment and other manufactured goodies. But the most important thing that ties it all together is electricity. Cheap, abundant electricity that will continue to power the goodies, toys, and necessary equipment that keeps us healthy, mobile, and interactive.

Environmentalists in Michigan, need to mature into the continuing reality of our still relatively industrial state. Those idealists growing up and believing the world of The Lorax exists around us need to stop believing in the fairy tale promises of such efforts as the United Nations 25×25 plan which will appear on your Michigan ballot in November.

And yes, I DID say, the United Nations plan.

The 25×25 number is no coincidence. In fact even proponents would likely point those who are curious to 25×25.org, to get their curiosity sated. What is barely discernible from the outward front of the site is its United Nations Related ownership. (note the contact email for the connection) The UN of course, has been steadily promoting its globalization platform to equalize all the population into an equal state of misery with its Agenda 21.

Even as people are awakening to the UN Agenda 21, and its effects on private property and the way we live our lives, its still plodding forward slowly driven by the inertia of roughly 20 years. In 1992, we were told that the rest of the world was poor. And poor, not because of their own despotic governments, central planning, or inefficient socialist tendencies, but rather as a result of our (U.S.A.’s) own successes.

And on June 29, 1993, The “President’s Council on Sustainable Development” was established by Executive Order No. 12852.

Its mission described as “solely advisory in nature” though since that time, countless federal grants and incentives to local governments through COG functionaries (‘Council of Government’ – Non government organizations, but partnered with government) have been given. Those non profit NGOs have then acted to finance the implementation of zoning and planning rules that wouldn’t have had the interest without the seed money feeding planners and local officials who express a desire for cool cities, village centers etc..

A21 and its accompanying Rio Declaration are pretty clear.

To achieve sustainable development and a higher quality of life for all people, States should reduce and eliminate unsustainable patterns of production and consumption and promote appropriate demographic policies.

What is Unsustainable? And who decides the ‘demographics?” And it likely cannot be done without an excessive amount of planning.

We have been wondering up here in the hinterland why some rural communities and townships would EVER consider hiring urban planners to work full time. Perhaps it was the free money to start doing so? One of those MSU trained planners locally developed an ordinance for campgrounds locally that restricted the ability of a family to live on the campground they built to only September. Stating “It would be a Residence then..”, the planner pointed to it as a zoning argument.

Yeah, because an owner living on his own camping property violates everyone else’s rights.

And in the upper peninsula, the ongoing concern for a coal plant should be ringing the alarm bells like a catholic church on Sunday morning. I wrote about it last December:

“And manufacturing is what Michigan has always been about. No Utopian vision of cool cities and green ‘great societies’ where we are all fed like pigs with a trough, can undermine the fact that Michigan’s secret to success has always been its ability to craft, create, or build, and its secret to recovery will be the same. A higher cost to manufacturers translates directly into either higher cost of goods, a few less people on the line, or even more devastating a loss of a company altogether. According to a September SMU study, energy could be particularly hurtful to Upper Michigan’s core industry, paper.

“For each manufacturing job lost, many other dependent jobs will also exit the economy. One in eight private sector jobs rely upon our manufacturing base. For energy intensive manufacturing industries, the relationship is even higher. For example, models show each job lost in iron and steel, 12.3 jobs are lost elsewhere, pulp and paper, 9.7 jobs and refining, 36.3 jobs”

A higher cost of energy in the Midwest, means higher costs to mine ore, produce steel, means losses of jobs there, and results in double whammy to the upper peninsula paper producers.Oh, and costs WILL be higher. Even directly to the consumers in the UP by the actions of this administration’s EPA, the cost of electricity will likely increase by 4 cents per KWH. A shutdown of this particular plant in Marquette will require the building of a transmission system from Wausau, WI at a cost of a Billion bananas.

Typically, those costs are passed along to buyers of electricity, ya know?

When considering the cause and effect of such overreaching regulatory efforts on Michigan’s working class, one might consider such factors to be important. If overall health concerns are truly paramount, then the cause and effect might matter to a discerning leader. If economic health concern is a part of the equation then any leader who feigns ignorance of such effect is derelict in his or her service representing us.

And therein lies the problem.”

And now, under the guise of a local environmental initiative, the 25×25 plan is trying to force us out of even more. The initiative would mandate that by 2025, 25% of the state’s electricity must come form renewable resources. In one of the strange twists of the environmental movement, those resources by the way, DO include hydro electric power, yet all the previous enviro-babble (25×25.org does not) has stated it is NOT a renewable. The proposal was filed by Michigan Energy, Michigan Jobs on January 12, 2012, and turned in July 6 for the November ballot. Indeed it follows the UN Rio Declaration principles and guides us toward a more complete compliance with A21:

In order to protect the environment, the precautionary approach shall be widely applied by States according to their capabilities. Where there are threats of serious or irreversible damage, lack of full scientific certainty shall not be used as a reason for postponing cost-effective measures to prevent environmental degradation.

You know, if someone were to point out that space debris and mind control waves enters our atmosphere daily, shouldn’t we as a precautionary measure wear tinfoil helmets when outdoors? Certainly lack of scientific certainty should not be used to hinder our absolute safety. I am sure they could be purchased cheap, or made with your left over thanksgiving baked bean covering.

The radical 25×25 initiative is a way to get us out of the manufacturing business. (A global agenda) And it is unworkable. The Environmental Council has the MSU Green sheet Jobs report states:

To protect consumers, compliance with the clean renewable electric energy standard shall not cause rates charged by electricity providers to increase by more than 1% in any year. Annual extensions for meeting the standard may be granted, but only to the extent demonstrated to be necessary for an electricity provider to comply with the foregoing rate limitation.”

1% increase in cost limit? Yeah.. Good luck with that. The chart below gives an example of the comparisons. 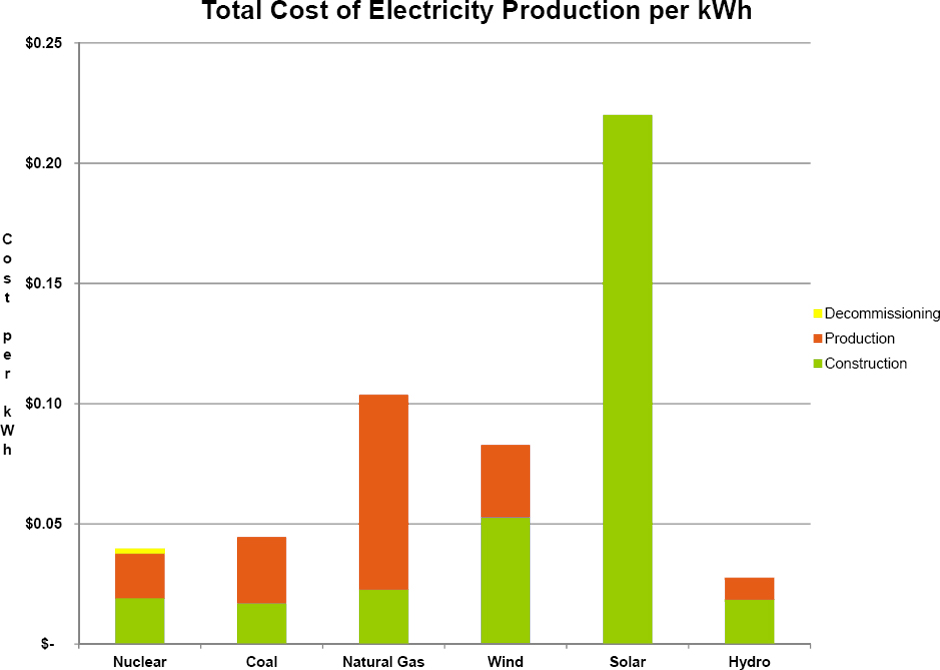 And the claim of jobs creation has already been debunked. Spain tried it, and has since suspended its support for such things:

“The results in Spain were even more stark than in Germany: a study conducted in 2009 found that for every 1 “green” job that Spain created, 2.2 jobs were destroyed elsewhere.”

Expensive energy (no way we would see 1% increases) will certainly not increase jobs as THIS release would lead you to believe:

“At least 74,495 Michigan jobs will be created if the Michigan Energy Michigan Jobs renewable energy ballot proposal passes in November, according to a new report from researchers at Michigan State University.

First off. It would certainly create jobs in the green sectors. But the lesson Spain gives us should give pause to voters stupid enough to sign on to this. Secondly, $10 billion might be accurate as well, however, $100 billion or more in withdrawn or depreciated investments in manufacturing just (barely) negates this gain. Third, there is this little problem with how the job creation is represented:

OK, then on the backside, we would only see a “Spain effect” job loss of 163,889 job YEARS. Funny how some things are measured that way. Is a Job year similar to the “President’s Council on Sustainable Development’s person-years? (see number 5)

Yep, things are indeed looking up.

Up, as in Cost to produce goods, unemployment, wealth and technology transfer overseas, and overall misery index.

The 25X25 Ballot initiative would be more like a 2×4 on the back of the heads of job creators in Michigan.