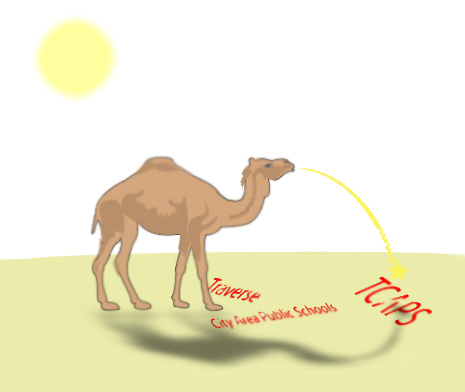 “The straw that broke that camel’s back” perhaps.

That could be the headline when the Traverse City Area Public Schools see their most recent request for millage fall flat on its fat face.

TCAPS is looking for support to continue its Capital Infrastructure Improvement Program through authorization of bond sales that will generate $100 million over the next 10 years. According to TCAPS, the millage rate necessary to repay these bonds will remain below 4 mills.  Given the current rate of 3.1 mills, where did the other 29% increase come from?  The purpose of these requests must be physical asset based only, and this level of increase must surely be based on some specific need, right?

Of course.  The need for a particular feel good wear around the neck kind of thing that says “look at me!”

Pure and simple.  Want.  Covetousness, lust, or simply overwhelming desire.  Spartan accoutrements be damned, lets go all out and have us a performing Arts Complex renovation of the Central High School Auditorium!  From way back in the March 5 Ticker:

” Traverse City Central High School might finally realize a decade-long dream: to replace its cramped and outdated school auditorium with a new performing arts center, one larger than any arts venue in the area and shared with the community.

Plans for the proposed center are still in the “very theoretical and conceptual phase,” says Paul Soma, chief financial officer for Traverse City Area Public Schools. But he tells The Ticker that, this week, TCAPS’ finance and operations committee will tackle an important first step: It will consider if – and how – funding the project might be possible.“

Just build it.  The money? It will come. Or not

One option on the table is to renew the current 3.1 millage levy and tack an additional mil on to it, says Steve Cousins, TCAPS superintendent. The additional mil would enable the district to fund the performing arts center project, plus (if property values stabilize) allow for the needed reconstruction on three TCAPS schools: Interlochen and Eastern and Glen Loomis elementary schools.

Soma says plans for a performing arts center have been discussed for the last decade, but have been pushed back again and again because of more pressing needs, most notably the completion of reconstruction projects at six other area schools.

“It’s gotten to the point that we just need to do this,” says Cousins.

We NEED to fire this man and any others who have this particular disease that is sadly, so common in the public sector.  Its called “other people’s money” disease.  Until we do so, they will continue his needful pursuit of shimmer at the cost of our substance.  When a “dream” becomes “need” for public spenders, grab the suture and get to work on the wallet, and don’t let that sucker open till the next school board elections.

Its not as if the board, led by its president,  Kelly Hall has any problem with such spendthrift ways:

“TCAPS board members said they recognized the work ahead of them when they voted to proceed with the bond proposal.

“This makes long-term, sound economic and financial sense for the district,” she said. “The performing arts center tends to be the highlight of the proposal in many people’s minds. It’s big and it’s exciting. But as for the existing auditorium, it’s our responsibility to educate people that it’s just not functioning. For a school of that size and that caliber of education, we’re not talking about a luxury item here.”

Lets do that.  Lets educate people how cold and callous they are if they deny such a ‘needed’ no-luxury item to our poor underprivileged students at Traverse City Schools.  Lets indoctrinate the masses that they have failed for decades by allowing such a lowbrow space exist.  Lets expand that education from the international baccalaureate boondoggle of Acme being lauded as bringing our A-game out, and go for the Olympic pool sized gold with a Colosseum full of entertainment seekers, because THAT is the most important aspect of public education!

You know what else is old?

The stunning willful ignorance of so many who hold public office, that think that this type of request is even remotely justified given our current economic conditions.  Of those who are HIRED by those smarter-than-thou types who would dare challenge the integrity of opposition to this type of effort. And of having to put up with the executive inference of not being so smart because of a choice to not support this ‘investment’ in our children’s future.

The article referenced above even included a voter who would otherwise support continuing the bond, yet will likely not now, because the additional ‘not-a-luxury’ component has been added to the continuing 3.1 mill request.

I can dig it. In fact, I asked about that.

During a planning commission meeting yesterday, I asked Superintendent Stephen Cousins why would they tie the two parts together and risk its failure?  He said “smart people” will see the need for it, and the additional amount won’t hurt its chances.  He even had the nerve to suggest the higher request is only the MAXIMUM amount the school district could levy.  That they may not have to go to the maximum authorized amount.  However, folks who pay attention to their tax bill will note that we have been paying the previously set maximum asked for.   Maybe the ($224,000/yr’s worth-of-smart) school chief might be a little disconnected from the need to pare back the household budget as it has been for the last few years.  Plenty of smarting folks out there paying property taxes to the point of a tax sale already.  No need to make more of them too much smarter.

Unfortunately, Hall and Cousins may not understand that smart doesn’t automatically translate into disposable income.

And taking the electorate for granted may not be so smart either.  Assuming there will be sufficient concern for the general building needs to carry the additional load of an unnecessary performing arts center is maybe not so smart. In fact school millage requests aren’t as popular with voters as some other requests lately.  From Bridge Mi:

“School millages weren’t as successful as the other major categories, but 71 percent of the 56 requests did pass. Some of those requests consisted of one school district asking for money in multiple counties.“Schools have to be very careful and thoughtful about how much they ask for, the timing of the ask and to truly understand voter sentiment,” said Jennifer Rogers, spokesperson for the Michigan Association of School Boards via email.

Right now, too much is being asked and at the wrong time.  The combination of misplaced priorities by the school leadership, apathy to the economic condition of the community, and the continued willingness to load up the education system’s pack animals known as property owners, should result in a failed request.

Good advice to school board members for the future, would be to avoid looking those sometime lumpy beasts in the eye, and if they spit, don’t be surprised.