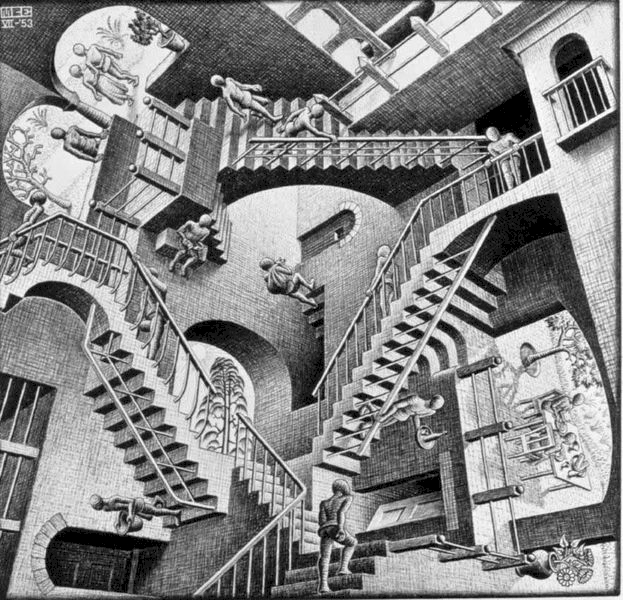 “Relativity” is the name of the MC Escher piece on the right.

It is a term that offers explanation for the perspective of any individual who discovers a unique truth within offered questions. A resultant truth different and contradictory to that any other person might deduce given the same information.

Because as in the picture to the right, the base truth is where the base starts. Its where the beginning of the equation and going up through all the filters it becomes an ultimate discovery.

Perhaps gravity is to blame for the confusion as illustrated in the masterpiece.

To also blame perhaps, for the distorted worldview of the left.

Nothing grounding the philosophy of the left leaves them in a sort of free-fall anti gravity situation. With an “alternate lifestyle” it chips away at the grounding those on the left have perhaps once upon a time enjoyed. It loosens the chains to the anchors that have held civilizations together for eons, or even for certain periods within the time of man.

Human life, so sacred and necessary to advance civilization, becomes cheapened through abortion and put in a new position askew from that which it deserves, thus allowing all manner of atrocities.  Children taking cue from those who regard life so callously as to extinguish it in its earliest form become hardened, violent, and callous themselves.

Marriage between a man and woman considered sacrosanct once, now untethered by actions of those who practice alternate lifestyles becomes weakened, and those who hold strongly become from a matter of perspective, the “alternates” themselves. Likewise, all manner of behaviors previously seen as perverse from a solid grounding, now become normalized in the eyes of many. Likewise up becomes down, and left or right become the distortions of each other.

MC Escher’s “relativity” might well have been a rendering of a physical environment, but its uncanny resemblance to the varied perspectives of man serves well to analogously highlight the un-grounding of our civilization and offers a visual representation of how the same questions can be answered correctly, yet differently.

“Correctly,” relative to the gravity of those who pull some of the answerers away from grounded principles and long established truths.