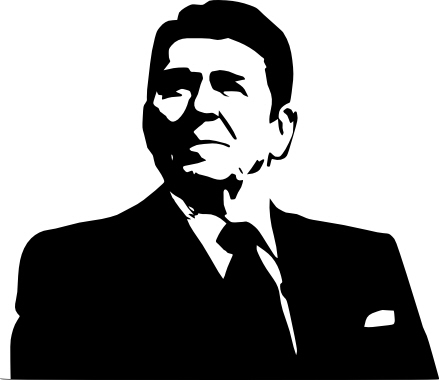 No politician that I am aware, has elicited the kind of emotional fondness from both sides of the political spectrum as Ronald Reagan.  Often, the praise exhibited by those on the left is that which describes him as a President who got along and compromised with Democrats.  And often the praise from the right is that which recognizes his stalwart conservatism.

Many of us have seen the speech in which the gipper talks of principled leadership:

I am impatient with those Republicans who after the last election rushed into print saying, “We must broaden the base of our party” – when what they meant was to fuzz up and blur even more the differences between ourselves and our opponents.Our people look for a cause to believe in. Is it a third party we need, or is it a new and revitalized second party, raising a banner of no pale pastels, but bold colors which make it unmistakably clear where we stand on all of the issues troubling the people?

Let our banner proclaim our belief in a free market as the greatest provider for the people.

His impatience not unlike our own which can be brought about by those Republicans who sway from their convictions, who are well wishing, and cannot find the ability to stand solidly during tests of principle.

Indeed, Reagan would have been as disappointed in the decision by George HW Bush, (the senior) with his broken promise of no new taxes.  As well he would have been appalled, at the manner in which George W Bush (the younger Bush) while exclaiming how it violated his very principles still signed off on a ‘bailout’ of unconscionable measure, with his last acts as president. Both moves blurring the line between principle, and the party which they purported to represent.

The reason Reagan brings about the current feelings of goodwill, goes further to support the very ideals which he lived to, and promoted vigorously throughout his tenure.  The reason Ronald Wilson Reagan reached into the hearts of so many Americans without regard to their political ideology, had more to do with the way he lived his life, his integrity, and whom he was.

In my view, the life of our 40th president was not that which often accompanies political aspiration. It was not one that frequently demonstrated a contempt for the values which he espoused.  Ronald Reagan attempted to live his life instead in a way that he identified as proper and principled.  In a manner that reflected consistency and predictability.  The very predictability that engendered trust in  his congressional relationships, and the very predictability that gave proper and heeded warning to the hostage takers in a land far away both geographically, and ideologically.

The knowledge of who this man was, was hardly guessed however.  The very nature of his inescapable tendencies was broadcast ahead of him for years with a consistent message of both conservatism, and backbone.   His ‘bold colored’ banners flying long before even the first election that brought him to Washington, as the leader of the free world.   His love for our country every bit as as evident in the time of his service, as his love for his wife Nancy, seen years later in the published diaries which validated the honor which he deserved.

Ronald Wilson Reagan presented best in his direct conversations with the people of the country, often reminded us of who we are as a people and what has made us great.  His stark contrast from the opposing viewpoints of the Democrat party where he once hung his hat seen no better than with his view that it is America that was the focus of aspiration.  That it was America as a beacon to the yearning of liberty in those around the world that made us great. That there is, and was, no equal to the United States of America.

The Contrast is stark indeed.

Today is the anniversary of the 100th birthday of (in my view) the greatest president of these United States since the nation’s founding.  He didn’t play as an elite.  He represented all of us, and he spoke to all of us.  He was one of us, and never pretended to be otherwise.  His principled and conservative belief set was universally respected, and his faith in the greatness that resides in the American People.