The math.. just do the math I say!

On an average day in Traverse city Michigan, there are 11 hours of daylight.  Obviously, winter and summer months differ significantly, but if one wanted to calculate the mean between the seasons, 11 hours would be it.

Traverse City Light and Power is about to spend $500,000 to take advantage of that 11 hour average window of opportunity.  A window that surely must shine 100 percent right?  Never mind that the 50KW array of panels proposed might only reach that level if it does.  from the related article:

The city-owned utility will build a $500,000 community solar project next year as it continues to amp up use of renewable-energy sources.

The 50-kilowatt system will include up to 120 solar panels installed at its complex on Hastings Street, and officials hope the system generates power by next fall.

50KW is enough to run 50 Hair dryers, or 25 water heaters, or 30 small air conditioning units. Not at the same time.  For general use in home that have any of the aforementioned appliances, perhaps 5-10 homes might be powered fully by such a system, at least when the sun shines.  11 hours a day.  So that a statement could be made how ‘green’ our community is. 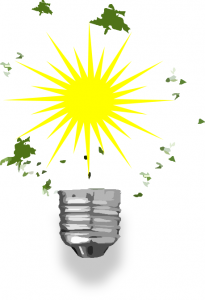 The actual VALUE of the power at 10 cents per KW (the current WIND POWER cost TCLP is paying for green)  is $50 per day, and only IF it is operating at peak efficiency.  Roughly $18,250 a year.  A cost of $500,000 for the 25 year life span of the solar panels doesn’t make a lot of sense. If the panels will have to be replaced at that point, the recovered cost would only be $456,000 in 2010 dollars.  The recovered cost MIGHT be that, if only the sun shines all the possible hours, and never loses its efficiency.

Never let things like entropy get in the way of sound decision making.

Of course there is the cost of the money as well.  And anyone who has ever gotten a mortgage understands the doubling of the principal when stretching loan amounts out.  even if the money used is on hand, money used with long term payback has a cost related to it.

Of course TCLP is a government run ‘business’, and its ULTIMATE reality is the fungible nature of its possible failure to produce.  Though ratepayers are immediately liable for such errors in judgment, it is the city of Traverse City which ultimately holds the stock in the operation. I suppose its too much to expect anything resembling real cost analysis before spending on what has as its face a positive end, yet results in yet another vacuum for taxpayer dollars.

Getting more blown away… all the time.