It seems every time the good ol US of A comes up with a really great idea, it’s value is seen by some as something to capitalize on, so that added regulatory measures and profit siphoning processes are added by government, tools of government, or users of government.  And certainly, when we do something in this country, it is decidedly big enough that it has its process duplicated by those who think they can compete with us, and because of the siphoning, it usually isn’t too hard.

As many know, I make my living wholesaling CCTV products that come from a variety of countries, but only a few from the US.  I have a decent business relationship with overseas based firms that 30 years ago could not have been possible.  I respect the ability to import, and I support the competitive nature even in the face of purposefully devalued foreign currency and living conditions.  The opportunity for people to compete in some manner sometimes requires this, and what happened during our own industrial revolution now gives hope to even the poorest in nations that seemingly would not have ever had such happenings.

Rugged capitalism gives opportunity to those who are willing to WORK for it.

And even in the face of what I do, and the high volume of foreign merchandise that I sell, I still prefer to buy American.  If there is a way that something I seek could have been made in the US, I’ll find it however.  I’ll pay the non devalued price, support the regulatory and confiscatory behemoth that thrives from it being made here, and keep a few of my neighbors working, even if they have an inflated sense of worth because of a government which protects the immoral art of extortion.

I’ll pay the price, as will so many others, so that we maintain SOME industrial structure here in our country, in THIS state of Michigan, and even locally in my town of Traverse City.  I drive a couple of trucks made here, (actually one in Indiana) and carefully search for any product that has a USA, Michigan, or Traverse City label.  In my searches, I have discovered a couple of interesting things that defy conventional wisdom too.  Ladders that are made in the US are more likely to be found in Walmart than Home Depot, and there are Reese style trailer hitches that are cheaper (and Michigan made) in the local RV accessory store than the Chinese ones at the farm store chain.

If I hadn’t looked, I wouldn’t have known, and would have simply ‘accepted’ my first discoveries as ‘just the way it is.’

Because conventional wisdom says that there are not a lot of goods made in America anymore.  And for Santa Claus, the elves must be Chinese.

Indeed, there are a few toys made in America, but its actually a little bit of work to find them.  For most folks, its just easier to buy what is on the shelf that has been selected by a store operator, than to engage in selective discriminatory selection.   Indeed, discrimination (using the word properly) that would provide the other part of the solution to a shrinking manufacturing base in this country.

Perhaps as a nation, we have given up both the individualism, and thoughtful discrimination that gave us the competitive edge for so many years. The thing that made the USA the standard.  Our manufacturing prowess, and sheer ability to build, create, or produce the most wondrous of life enhancing products, is in danger of being eclipsed by nation states that at the very least understand the ‘competitive’ part.  They get WHY we were able to industrialize, even as they continue to hang on to the dehumanizing aspects of tyranny and despotism, or collective oppression.

And now, we are about to lose Christmas, if in fact it is not already too late.

I know we didn’t INVENT the day, but we celebrate it.  It is a federal holiday right?

Yes we do, and it is.  But the bold convictions that drove people to this continent in the first place, seem to be too easily replaced by the squeamish political correctness that even Goldilocks might have found too soft.  From the cashiers who fear losing their jobs if corporate masters were to discover them saying “Merry Christmas!”, to the tree sellers who say “happy holidays” while you are loading the tree from their temporary corner lot at Christmas time which begs the question, “what holiday mister?”

Sadly, its pervasive, and has even reached such institutions I respect and admire.  This image from the Sam Adams Alliance reached me by E-mail originally, but is currently posted on their site.  The message to be sure is freedom, but again I must ask “What holiday?”

Interestingly, Mr Adams was one of our most pious of founders.  He was indeed one who would celebrate Christmas:

Mr. Adams was a Christian. His mind was early imbued with piety, as well as cultivated by science. He early approached the table of the Lord Jesus, and the purity of his life witnessed the sincerity of his profession. On the Christian Sabbath he constantly went to the temple, and the morning and evening devotions in his family proved, that his religion attended him in his seasons of retirement from the world. The last production of his pen was in favor of Christian truth. He died in the faith of the Gospel.

It seems strange that our overtly apologetic nature would even steep itself so much into the culture of those who fight for real tradition as this.  Perhaps the battle will be waged for some time, but something that blended nicely into our culture for so many decades was piety and a touch of commercialism that made it fun for some.  We so fear political, legal, or peer influenced reprisal, that the secular bigotry now carries the day.

From over 50 domestic vendors, and a few  ‘domesticated’ Chinese expats,  I have received as many ‘season’s greetings’ or ‘happy holiday’ cards.  My wife knows when I get them, as she hears me asking aloud ‘WHAT SEASON?!” I have gotten a few Merry Christmas messages..  But only very few at least, from those in THIS country.

Again, I discover the Chinese seemingly get it.  Or at least PART of it.

While the domestic influencing of what we can or cannot say is slanted toward such a neutered (or neutral) posture, the Chinese know how much this ‘season’ means to them.  Perhaps it is from a different perspective, (being the ‘holiday’ shopping season of the US)  but at least the words, and/or lack of fear, or perhaps simply the failure to be ‘educated’ AWAY from saying such things as “Merry Christmas”, allows them to express more openly, what we seem to have lost.  They have once again learned from our successes, and what has made us great as a nation, while we merely turn our backs.

The images below are just a couple that reflect the greetings I have received from Chinese vendors this year. 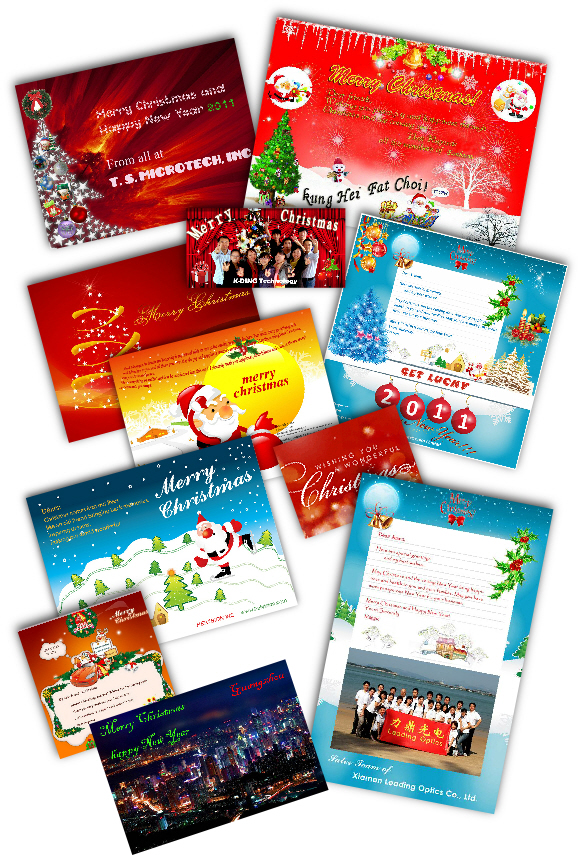 They saw an opening and took our words.  Copied them, and eagerly show that it means SOMETHING to them.  At least a part of what they express was a part of what we once did, as our mixed tradition allowed.  They know of it as a GOOD season, and they know its name.  And at the very least, it may well lead them to the true meaning of the gift we have apparently taken for granted so much.  A gift of his life to man that offers forgiveness to us for the decisions we make.

Even when those decisions make it appear we are afraid to say his name, Jesus Christ, in a simple greeting.  A greeting which has at its core, the best wishes toward man.