The fake tea party in Michigan has been dealt a pretty serious blow, and will have to pursue its ambition to deceive voters by taking its case to court, represented by one Michael Hodge. Michigan Capitol Confidential reports: 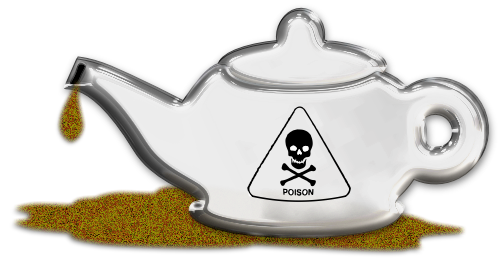 Mark Steffek, the man who formed The Tea Party and was described by the Detroit Free Press as a former union steward, was not present. However, dozens of grassroots tea party activists did show up, and appeared to be unanimously opposed to Steffek’s creation.

On a vote of 2-2, the Michigan Board of State Canvassers failed to approve The Tea Party political party formation petitions. Hodge said before the vote that he expected to take it to the state Court of Appeals perhaps as early as Wednesday.

Incredible how an unemployed Michigan laborer has the resources to afford such measures. I wonder if they will have any of the fake tea candidates testify on their own behalf. Maybe THEY know where the convention was! It seems Steffek apparently forgot to tell the lawyer where the convention was. He didn’t seem to know, but claims he was there:

After testifying before the board, Hodge spoke with the media, but had difficulty remembering details about the organization of his client’s new political party.

He couldn’t remember when The Tea Party state convention was, even though he said he attended it at a Saginaw hotel. Another reporter had to tell him the date (July 24).

He also couldn’t recall the name of the hotel.

Hodge said Steffek was his client and was the one paying his legal bills.

And I am the tooth fairy. I hope Steffek has some gigantic molars under his pillow.

And in other related news..

Jason Bauer, who was the notary listed on affidavits for a dozen of the Tea Party candidates, has come under fire in recent weeks for his role in signing up the candidates, who could siphon votes from Republicans. Two of the candidates were too young to be eligible to run for the office they were seeking and another candidate told Oakland County elections officials last week that he had no idea that he has signed up to run for an office.

On Saturday, the Democrats on the Oakland County Board of Commissioners demanded that Bauer resign from his job with the party, saying, “There is no place in our politics where deception can be tolerated.”

Not in their politics.. no sirree.. only for the rest of us.

Amazingly, the reason for the 2-2 split in the board of canvassers was a minor technical thing. The word “the” omitted from filing paperwork. No discussion as yet to the matter of fraud both in the collection of signatures, or the fact some candidates don’t even realize they are running for office.

Lets see if Bauer is an “honest crook” and holds his tongue after being run over by the bus the OCDP chair was driving, and carrying the Michigan Democrats to its maximum GVW.

I am sure even the flat tires didn’t make it feel any better.