Re-posted FROM, and AT Rightmichigan.com

There is no question that motivated conservatives, traditionalists, (whatever you want to call them) etc., who associate themselves with the still growing tea party movement, have made a difference. Long time Democrats and Republicans both have been uprooted and thrown aside this election cycle, due to a seeming inability to control spending and abide by constitutional principle.

Tuesday marked an incredible testament to this fact with an Northern surprise. And it also gave a glimmer of where non party weaknesses may lay.

The (at this point) win by Alaskan Joe Miller in a squeaker over a sitting US Senator in the Republican primary, would in prior years, be the unthinkable. In fact, even this year, it was considered merely a remote possibility, yet it happened with the help of Palin’s blessing and the tea party types. Alternately, some will point to the Arizona US Senate race race as a repudiation of the tea party contingent in THAT state.

But hold the phone. Palin also endorsed the winner in AZ.

Sometimes those pesky little things matter. Add to that, McCain’s hard right turn into the new populism of the tea party ideas, he became the perfect windsock. It not being so clear that he wasn’t the tea party favorite in the end. Even with his record of “moderateness” it should be noted, he had a few things that many in the movement are typically attracted to. One of those, is the fact he is a war hero. Second, is that he is showing full support of his state’s newest tool in fighting illegal entry in AZ, and thirdly, yeah.. he was initially endorsed by a favorite of tea partiers everywhere, Sarah Palin.

And before some folks get all freaky over the “tea party” becoming co-opted by the Republicans, I should point out that the organization of the Republican party has great benefit. The “co-opting” of ITS power (though most Republicans welcome the new vigor) will work best to restore traditional ideals. We need to take our wins within the Republican party along side the presumed “losses.” “The good with the bad,” So to speak. Better to be a mover of great ideas within an established base, than to be ignored outside of it, right?

And I hate to tell you folks.. we just ain’t gonna win em all. The trick however, is knowing the battles that are winnable, and which ones merely hurt your allies through division of resources.

The Wilson debacle (that is what I will probably call it from here out) is one that demonstrates a fairly selfish attitude on the part of many within the movement. Glenn Wilson is that guy who feels he is in the right place at the right time to make a difference. He has the money, the time, and apparently great big bus all gussied up to impress the country folk. In fact he is apparently charged up and ready to go.

His website has these issues as his message going forward.

While Benishek has THESE issues (Both were cut and pasted and format is a little different than original..)

Hmm.. other than Wilson missing RTL issue and a conspicuous lack of a defense posture, I would say these guys are quite similar in their quest to fix the way things are done in Washington. My guess is they would vote similarly.. probably on the order of 95-99%..

It must be that “purity” thing.

You know.. that pesky little thing that always keeps the C4L guys from ever gaining any power back for conservatives? “If it isn’t a dyed in the wool Ron Paul type of candidate, it has to be corrupt, so lets make sure that no one tries that silly little incremental gain thing.” I mean why take little bites when you can kill yourself with a great big belly full of nothing.

Don’t get it? ..Try eating a watermelon whole. (swallowing it) Even a stupid progressive know this.

Its about starting a trend, a process.. because big things tend to turn slowly. Indeed, Newton’s laws have their similarities in the political realm, and our government is as imbued with inertia as the moon which cycles around our planet. Or better yet the fully loaded train with a hundred dining cars full of after election revelers. Sometimes the politics are nearly as constant too, and standing on the tracks when the locomotive of the party choice is barreling down, will only raise an eyebrow on Casey Jones face.. just before you are “cow caught” into oblivion. 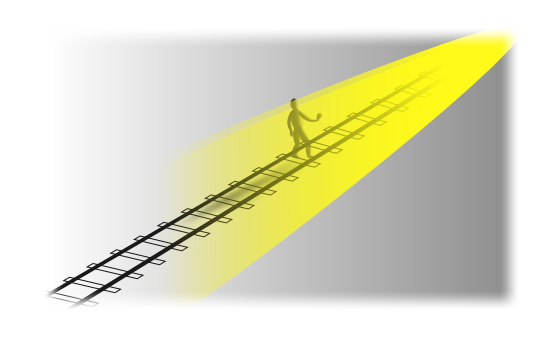 Wouldn’t it be better to be ON THE TRAIN?

People can complain about the two party system, but perhaps we can look at Alaska, where a tea party PAC, and a little grass roots support did what was necessary. The fact remains that even if Murkowski survives this event with the few absentee ballots that remain to be counted, she will have been given fair warning. The effect by those who knew a third party bid would be not only futile, but destructive to the cause of liberty in the end has prompted them to sufficient action, to remove the bad from the party. They worked from within. They became a part of the process and brought to it THEIR vision.

But it cannot be done by merely complaining about a two party system. The Democrats do that.. And then some of them join the lefty third parties.. And those guy never win either. And in the end, they never accomplish anything more than salving their egos, because they knew they didn’t buckle and “conform.” They find satisfaction in that they are at least as good as the guys on the right who would peel a few votes off of their own ideological brothers.. for the sake of purity.