The interesting mix of immigration angst and convenient disagreement by certain parts of the Federal government with the decision of Arizona to take on the duties that SHOULD be performed by the Fed is deafening.

Coincidentally it corresponds with the presumed decline in democrats to support the current crop of elected officials.

Coincidentally, Tomorrow there is a vote on Puerto Rican statehood

Coincidentally, there is a likely lawsuit by Eric Holder AG for the US where he will sue AZ and try to restrict their ability to operate with the sovereignty “protected” by the constitution..

I don’t believe in coincidences.  The timing is contrived, the person in charge of the borders (The former governor of AZ) has been visibly absent for long enough to allow things to get even more out of control in the last few months, and presumably the citizens of AZ, after kidnappings, and murder are supposed to sit on their hands and do nothing?

This is a part of a planned painting of a certain part of America as Racist and intolerant of people who are different. 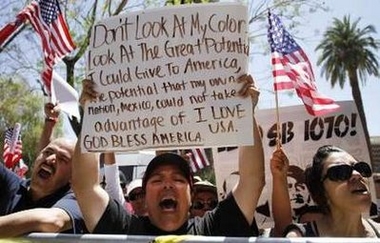 It certainly seems as though this participant has it pretty clear what the message shall be.

At least there isn’t a Mexican Flag flying high in the photo. well… not like the “produced” posters and flag in the picture from prior Immigration protests elsewhere.. like this one: 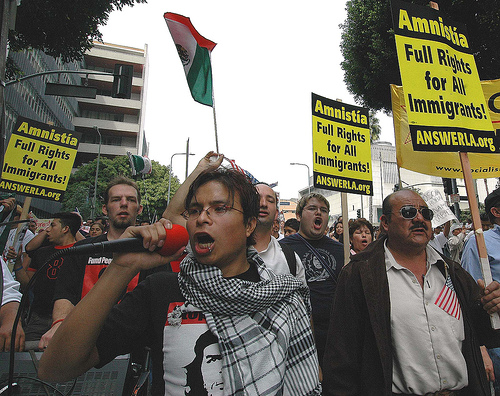 Amnistia indeed..  Forgive us our transgressions and trespass… Just don’t send us that place we came from, but are trying to turn the US into.. please.  Tongue in cheek perhaps, but given the picture directly above is protesters who ALSO want full blown Socialism, it is truth.  From their own website:

The A.N.S.W.E.R. Coalition formed on September 14, 2001. It is a coalition of hundreds of organizations and prominent individuals and scores of organizing centers in cities and towns across the country. Its national steering committee represents major national organizations that have campaigned against U.S. intervention in Latin America, the Caribbean, the Middle East and Asia, and organizations that have campaigned for civil rights and for social and economic justice for working and poor people inside the United States.

Yeah, I bold brushed the part that indicates a clue. If you think “social justice” is a good thing, there might be some oxygen available at the local emergency room (its still a free stop if you decide you cant pay) because you might need it.

But lets consider the FIRST picture a second..  Just look at that sign. By golly I agree..  I WANT him here!!  I want his skills added to the great mix we have!  Why wouldn’t I?  But first, I would have to concur with a commenter over at Sweetness and Light first, where Rusty says:

As for the person holding the sign in the photo, let me address each of your points.

Don’t look at my color We don’t. In fact, it has nothing to do with anything.

Look at the great potential I could give America that my own nation. Mexico, could not take advantage of Hey, if I understand this misconstructed sentence correctly, you want me to appreciate the hard work, dedication and ability to reach for a better lifestyle. Nobody wants that more than a conservative American. We’re behind you all the way on that. But we want you to do it legally.

I Love USA, God Bless America Yes, so if that is correct then you’ll hustle down to the immigration office, apply for citizenship, get a sponsor, take the required courses and pass the test and EARN it. If you’ve been here and love it so much then you MUST, at some point have learned to appreciate the fairness of the application of our laws, especially when compared to that of Mexico.

So, as I see it, I’m on your side. The only place we differ is that you want citizenship to be given to you whereas I expect you to earn it. You know, put some effort towards it besides just toiling and allowing us to take advantage of your “potential”.

This is a diametric opposition. You will never see my point of view and I vehemently disagree with yours based on our laws and what makes sense.

If you love the USA as much as your sign implies, then you would do everything you could to become a citizen legally. Otherwise, they’re just words on a cardboard sign.

Make it more than words on a cardboard sign, and take ownership good sir, and I will truly enjoy the fruits of your contribution to our great land daily.

But for what all this is being portrayed as in the media?  It clearly shows silly season has been extended to the second year in Obama’s term, and for the 4th year since the house was overrun by a socialist agenda.  This issue is nothing more than a fabricated attempt at using the hopes and dreams of would be American Citizens to power a political shift to progressive control in our country.