There are many who may make the claim that in order to promote the public welfare, licensure of certain occupations must be required. Top of the list especially, and not surprising, are occupations such as medical doctors, lawyers, engineers, and architects to name a few. The proponent claim being made is that without such testing and licensure, anyone could practice said occupations willy-nilly without any verification of their skills.

Of course we can’t have that, now can we? After all, people might get hurt… or something.

Now Michigan state Senator Jason Allen wants to add the personal care provider to the list of occupations requiring licenses. Yet again, the claim is that some class of people, in this case senior citizens, are getting hurt due to the lack of licensure.

I’m not going to waste my time with particular occupations and why they shouldn’t be licensed. There’s a simple reason for that: Because licensure of any occupation is completely unneeded and in many cases can lead to rent seeking/collecting activities.

“Oh my God, Jason! Are you serious?!?! We can’t have Joe Citizen practicing law, they’ll give bad advice!” Will they? Maybe, maybe not. The absence of a bar license has no bearing whatsoever on whether someone has knowledge of the law or not. After all, if that were the case, people shouldn’t be allowed to represent themselves pro se, right?

Of course the follow up concern is how people know if someone performs quality work or is even competent in the profession if they don’t have a license. It’s simple: The market.

Agreed, it’s hard, if not impossible, to tell whether someone is good when they’re just entering the market. However, that should bear no evidence to support the claim that licensure for ‘x’ occupation is needed. Even burger flippers have to start somewhere, and the fast food joints that hire them for the first time are taking a chance.

“See Jason! You just proved our point. People would never want to take a chance with a doctor who isn’t licensed and has no prior experience!” It may certainly be true that people wouldn’t want a doctor making medical decisions or performing procedures solo without out much, or any, experience, but that sort of thing is where apprenticeship comes in. It’s been used in many trades for generations, and it works!

I mean hell, I changed the ball joint on my Buick with the help of my buddy, who is not a certified mechanic, and it’s working just fine.

Then of course once people establish themselves, if they are good, they will get recommended. If they suck, they won’t get recommended, and people may actively warn others of them. Quite simple really.

If someone legitimately messes up however and can’t perform the services they claim, then that is what the court system is for. However, to preemptively say “you can’t practice in this field until you get ‘x’ license” is nothing less than a) Guilty until proven innocent and possibly b) Rent seeking.

“Rent seeking? What the hell is that?” This is a damn good example. Guess what, it’s usually these “institutes” pushing for licensing that are the ones collecting money from mandatory training and testing to get the license.

So yeah, occupational licensure – Rent seeking with a busted cloaking device. Beat me up, Scotty! Ricky ain’t coming back. 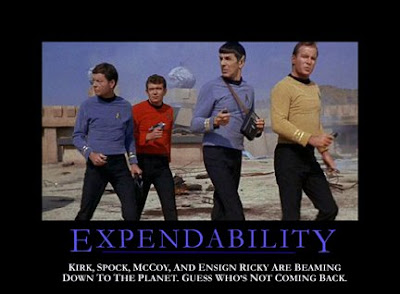