Tom Calkins of the Southwest Michigan Tea Party Patriots wrote on our recent excursion to Washington DC in an attempt to awaken a sense of who works for whom in our leadership.  Tom helped me secure and organize the lodging for the trip, and I am very grateful for his help.  I should note there are a million stories out there folks, but few as well told as this one.

Participating in the march is one of the most memorable things I’ve done in my lifetime. I am very proud to have participated. One of the most amazing impressions was the size of the crowd. Because I rode from Michigan to DC on a 55 passenger bus, I kept asking myself, “How in the world did all these thousands of people get here?” 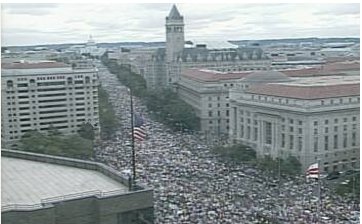 The march from Freedom Plaza to the Capital Building was scheduled to start at 11:30 AM. At about 9:40 AM the DC Police told the march leaders that the crowd had accumulated faster than expected, that there was no more room in downtown DC for people to gather and that the march to the Capital Building had to start immediately. (My interpretation of what is described in the article that follows my story.)

When I approached the Capital Building, it was obvious that we wouldn’t be able to get anywhere near the steps where the speakers were already talking. I ended up shoulder-to-shoulder with others, just to the east of the Reflecting Pool, 260 yards from the Capital steps (I’ve measured the distance on a map of the Capital Building and the Mall). Obviously, tens of thousands of people didn’t bother to take part in the march but went directly to the Capital and arrived there before the marchers. All the people that were behind me coming down Pennsylvania Ave. were stacking up from my location back toward the Washington Monument to the west of the Reflecting Pool.

There was no room to sit down. I decided that the limited durability of my 80 year-old body would not permit me to stand there for the additional four hours the speeches and functions were scheduled to last. I remembered seeing many benches along Pennsylvania Ave. as I was marching toward the Capital Building. So, I decided to walk back up Pennsylvania Ave. toward Freedom Plaza until I found someplace to sit down.

It took me about 20 minutes to (politely, most of the time) elbow my way through the crowd back to Pennsylvania Ave. When I got there, I was amazed that, looking back up Pennsylvania Ave toward Freedom Plaza, for as far as I could see, the avenue was still full of people, curb to curb, marching toward the Capital Building. The police had closed Pennsylvania Ave. at 3rd Street and were directing the marchers onto 3rd Street which cuts across The Mall, parallel to the Capital Building steps at a distance of 520 yards from the steps. I could not figure out where the marchers, once they were headed down 3rd Street, were going to end up. The Mall was full of people on both sides of 3rd Street for as far as I could see.

I found a bench about 1/4 mile up Pennsylvania Ave. toward Freedom Plaza. The avenue was still full, curb to curb, with marchers headed toward the Capital Building. I sat there in amazement for about 15 minutes wondering where all those people were coming from and how so many pedestrians were able to get into downtown DC. I concluded that most of them must have come via the Metro, which, must be a very good, high capacity system.

The size of the crowd is controversial. As far as I know, no official estimate has been made. Bill O’Reilly on Fox News Channel seems to have accepted the number of 76,000 from someone in the DC Fire Department. As O’Reilly admits, he wasn’t there. I was! And, the figure of 76,000 seems ridiculously low. Now I don’t have any scientific method to offer, but here is what I think is a low-ball estimate and how I arrived at the number.

Years ago, when the capacity of the U of M Football Stadium was 100,000, I remember looking around during a game and thinking, “So this is what a group of 100,000 people looks like.” My estimate is that the crowd I saw within 260 yards of the bottom of the Capital steps, plus the extreme east end of The Mall, plus those who marched down Pennsylvania Ave. would have filled a 100,000 seat stadium multiple times. In other words, hundreds of thousands of people. That is what I have to offer.

I call this a “low-ball” estimate because I was never in a position to view more that 1/3 to 1/2 of the crowd. I never observed the people within most of The Mall or on the south side of The Mall which, very well, could have exceeded the number of people I did see. The people I did not observe are not included in my estimate.

Submitted in all sincerity.

Tom, thank you for your participation and help putting this together.  By the way..  I think I have your hat.  –  Jason

← Michigan Senate Affirms Its Sovereignty Under the 10th Amendment.
In the works… →