What if minimum wage laws were eliminated, and folks could hire at will employees for $1 an hour? Would YOU work for $1? or a WHOPPING $40 a week? If that’s what you wanted to do, you would. AND.. you should be able to.

Its your time right? Nothing could be any more possessed or OWNED by a person than the decisions they make as responsible adults or even responsible children perhaps. (which is an argument for another time) As stated in the declaration:

“We hold these truths to be self-evident, that all men are created equal, that they are endowed by their Creator with certain unalienable Rights, that among these are Life, Liberty and the pursuit of Happiness.”

These words did not come with an asterisk, nor did they come with conditions of “government approval.” They were made as a statement of fact.

Is not your decision of how you allocate your time in the support of yourself or family a self evident truth? Does not the pursuit you seek bring into question the validity of restrictive actions by state such as artificial wage controls with punitive effect on those who disagree with those controls? As it stands, the minimum wage laws’ punitive measures are most certainly levied upon the business or employer which might offer less than the government mandates, yet it serves as an even greater punishment to the prospective employee as well.

What of the person whom we might consider homeless, that might not prefer to participate fully, has a limited ability (by choice or circumstance) to offer any (or a reduced)  demonstrable work value? They might well have usable talent, but because the risk to hire such a person at even the prevailing minimums can be enough to be prohibitive, they will remain without a means to naturally support themselves. 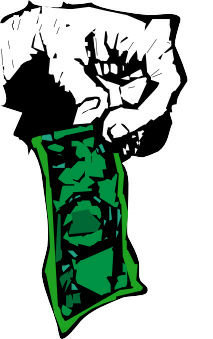 Would a dollar an hour as a starting wage allow the needs of both the employer and the needy find each other more easily? Unfortunately, It currently cannot, because the government will not allow private individuals to contract with each other on such matters.

What about the first time job hunter?

My 17 year old niece in Battle Creek who this year graduated high school, explained she has filled out over 30 applications in the last couple of months. She just wants to get job experience. She attended the local career tech program in graphic design, yet is quite willing to take any job offered, including a fast food position, something that does not use her vocational skills.

She is frustrated that she cannot find a position. And while minimum wage as it is would certainly satisfy her income requirements, her desire for work rests more on that she wants the experience for the better positions later. She is smart enough to know that a firm which would consider hiring her for the field she is trained, will still have a better feel for someone who has a history of work to determine qualifications. Even if that history is in a totally unrelated field.

Again, the prevailing wisdom of the lawmakers is that the employee does not in fact have the right of ownership required to negotiate for anything less than the wage minimums set by a arbitrarily established set of numbers.

Would she work for $1 an hour? I doubt it. Would she take less than what is now the minimum? I am sure of it. She WANTS to work, but the state will not let her, or at the very least has set up a playing field which creates far fewer employment opportunities.

Many times I have presented this logic, and the thought of eliminating minimum wage laws entirely to people who presume themselves to be conservative, (or otherwise) they will say “but.. those people will be taken advantage of!” or “Unscrupulous employers will game people!”

But what will also happen, is that in the face of full employment, business that needs help will pay whatever makes sense for their business model to pay for that help. In Michigan, prior to Granholm policies enacted, minimum wages already didn’t matter. If you paid minimum wages, you might not get the employee you wanted. In 2000, Traverse City entry level level positions were already paying $7 an hour. If you had hands, you were hired.

Consider that with an artificial bottom, you might never get the job in the first place if it isn’t created as too great an expense.  Surely a troubling thing for the the position that might produce output not even worth the minimum government mandates. A full spectrum of wage scale guarantees every person who wishes to contribute, can find work.

And for the person who simply needs bread in their belly, someone will ALWAYS be willing to pay $1 an hour.

9 comments for “One Dollar An Hour.”