Its no wonder John Conyers hasn’t read a bill he has signed in the many years he has “served” his constituency. (feel free to see in his own words) They are just far too complicated for a “casual” glance and understanding, requiring the assistance of a team of lawyers, and the mail room clerks who actually write the things in the first place. (remind me later, to champion that mail room clerks be saddled with the bills our congress sign into law..)

Such bills as “cash for clunkers,” though a program that started on July1, 2009 was not really effective till last Friday, when the language was better interpreted.  Three quarters of a month went by, before congress made the language of the bill understandable enough for dealers to readily participate in the stimulus.

The language issue may well have been solved, but the details about what happens when CONGRESS Mandates a set of marketing tools for a specific industry are now leaving some dealers scratching their heads… again.  Some are worried they will be left holding the bag because of rebates already given, yet possibly unpaid.  According to Bloomberg :

“Officials at the White House and the Transportation Department declined to comment on the program’s status. A White House official, who asked not to be identified because no announcement had been made, said the administration was 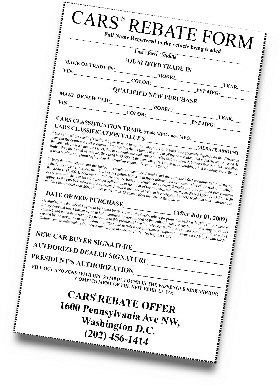 assessing the situation facing what had turned out to be an overwhelmingly popular program.

All valid transactions that have taken place so far under the clunkers program will be honored, the official said.”

Of course, this means a pay cut for at least one official.

And in the same article..

“It is amazing that ‘cash for clunkers’ would be this successful this quickly,” said Stabenow in an e-mailed statement yesterday. “I urge Congress and the administration to provide additional funding.”

Amazing? Perhaps for someone who has never been in business.  Perhaps for a person who hasn’t the slightest clue about market forces, what creates demand, innovation, sales, etc.. I think we are seeing in Stabenow now, what must have been the same genuine overincredulous doe stare that was borne of the first human to encounter fire… or perhaps just maybe.. the iPod.

Stabenow has now asked that an additional $2 billion in taxpayer funds be given to this “successful” project..

What is TRULY “amazing,” is that these folks, these “brilliant” cream of the crop legislators might never understand the relatively simple consequence by the act of peeing in their own pool, and they persist in doing so.  By not reading or understanding BASIC dynamics of the laws that bear their particular marks, members of  congress continues to set the toxic spill up for the next crisis. Doug Powers at Michelle Malkin points out:

In the private sector — which the government hopes to compete with using money confiscated from the private sector (some “competition”) — when you create a sale or promotion of some sort, you must make sure you’re covered in case it is very successful. Poor planning leads to unhappy customers, which equals going out of business. Fortunately for the government, they have no such consequence as “going out of business.” In government, incompetence is rewarded.

Markets, real “FREE markets” do not respond very well to tampering by external forces.  There are consequences, both short and long term which will demonstrate WHY government ought not fiddle. Consider the Cash for Clunkers bill by itself. With an average of $4,000 per vehicle, the original plan would essentially designate 250,000 cars to the scrap heap, or better yet.. NOT EVEN THAT.  Under the Scrap Value Rule:

“The CARS Act requires that the trade-in vehicle be crushed or shredded so that it will not be resold for use in the United States or elsewhere as an automobile. The entity crushing or shredding the vehicles in this manner will be allowed to sell some parts of the vehicle prior to crushing or shredding it, but these parts cannot include the engine or the drive train.”

What about the values of used cars, or even NEW cars post incentive?  For used car dealers, it will likely have an adverse effect. By creating an abnormal shortage of used vehicles of a particular class, the used car dealers will see higher prices to place those vehicles on their lots.  Further, the POOR will also be negatively affected, as new car financing won’t be in the cards for them.  When those who could not afford to buy the new cars even under the program attempt to find a suitable “b” value used car, they will see the added cost reflected in their purchase.

The cars which are being turned in, are likely NOT vehicles which are completely devoid of life.  Under the “dealer” section:

“You should bring documentation establishing the identity of the person who currently owns the vehicle, preferably the title of the vehicle, and documentary proof that the vehicle “has been continuously insured consistent with the applicable State law and registered to the same owner for a period of not less than 1 year immediately prior to the trade-in.” The final rule will specify what types of documentation would be acceptable.”

Not less than a year of being registered..  What this means is these cars have been on the road, and they are likely capable of providing years MORE service.  Perhaps years more, that a person of lesser means might not now be able to enjoy. The unintended consequences of well placed intentions perhaps, but nearly ALWAYS predictable if history is observed.

I could certainly go into much describing the effects on a secondary parts market, the creation of a black market for engines, transmissions, etc.., but my point is already made well enough through the raised eyebrows of those who are amazed and befuddled all at the same time.

The happiness Stabenow, and those who promote such unnatural actions to stimulate ONE segment of the economy, will be in stark contrast to the emotions felt by the unintended victims of the legislation. And the hardest hit? Those income limited folks who might never be able to buy a new car in the first place..