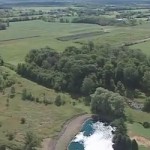 You might all remember the story of the King of the winds farms. in southern Michigan? The abuse of The Michaels family, Michigan citizens, by the DEQ and local authorities should raise the hairs on the back of your neck whether you are Republican or Democrat.

The development of 300 acres for an equestrian center was stalled by local regulatory types, but was able to go on as they met the requirements…  Initially.  The local government sought numerous “technicalities” to stop it all together, so that it could instead be developed as a subdivision, rather than the ag designation it was at the time.  The local government was seeking its own expansion and enrichment.

They were unable to stop the horse farm legally through their technical measures, but that didn’t discourage them so they utilized the full force of the DEQ to stop composting on site, (a normal part of operating a farm) and to ultimately disrupt the farming operation ..so they would go away perhaps?  The abuse, culminating with unrealistic mandates, including those to literally “remove all the vegetation from 30 acres” as part of compliance could not be met.. they went to jail. Not for any violent act, but for the audacity to consistently defy unrealistic and vindictive mandates by an overactive township government and our state DEQ.

But there is an effort to allow citizen to provide remedy for retaliation by agencies pending in the legislature.  In fact, its number of sponsors exceeds the number necessary to pass from the house where it is originating. Michigan HB No. 5045 is:

A bill to protect a person’s right to communicate regarding state government functioning; to prohibit retaliation for certain communications; and to provide remedies.

The abuses suffered by the Michaels might not have happened if the act were law.  Consider the pattern of harassment brought on by the Township and the DEQ, even when the Michaels complied.  IF they had felt they could “communicate” with a state legislator to act on their behalf to reign in the zealous actions of the state agency, perhaps the agency would have acted properly.  Note that the bills language includes:

Harassing treatment includes, but is not limited to, the following:

(i) Excessive visits to a private property.
(ii) Changing standards or requirements during the course of an investigation.
(iii) Delays in issuing a permit or changes in communication deadlines.

The issue of property rights is one our founders stood firm with.  The point in which we abrogate our ownership to those things privately held, to the most minor office holders of our government, is a point where we have turned our back on the principles of a free nation.  I encourage the passage of HOUSE BILL No. 5045, and any other legislation which applies enforcement of CITIZEN rights in this time of a continually growing oppressive government.

← Jason Gillman… a Conversation
They Are All Beauty Contest Winners →