I received a few more photos. (scattering them throughout the post) This time from Ben Duff of the Soo Tea Party events. And figured this might also be a good time to announce plans for the Tea Party Events On July 4, 2009. 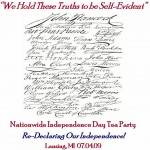 As summer is always a busy time with the Cherry Festival in Traverse City, I am always looking to have a little escape possibility on the side.  This year, The National Cherry Festival STARTS on July 4, and I figure the northbound traffic will be heavier than the southbound.  I plan to attend the Lansing Tea Party event which starts at 1:00pm and ends at 3:00pm.   In fact, I am entertaining the thought of hosting a bus trip once again, as even Lansing is going to have its share of travelers, and traffic is sure to be uncomfortable. 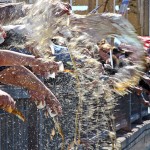 There might also be Tea Party activity in TC and other cities as well that day, and I am waiting on confirmations before posting any schedules. (*hint to tea party organizers)  As the Month wears on, I will post updates as soon as I receive them.  For those who want to become more active and help to make the Tea Parties affect policy, you might want to take a look at participating in the Tea Party Convention! A sort of Leadership conference which will help you make a difference and help us consolidate our voices so as to be heard over the noise of silence of our accepted main stream media. 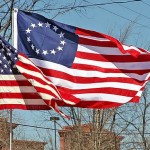 Independence from unearned control, is a concept our founders took seriously enough to risk their lives for, and declared themselves to be free of the oppression brought about by masters who had little connection (whole continents away) to their lives other than to feed from their productivity through unwarranted taxes.  The “soft” tyranny we experience today is hardly as physically threatening as facing the redcoats with the defense of only a pitchfork in the 1700s. But the threat to our liberty, and a threat of allowing foreign nations having a say on how we live our lives is a far greater reason to stand up and say “I choose freedom.” 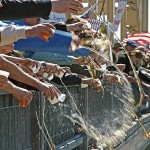 And how are we allowing others who do not share our belief sets, our fundamental principles, our glue that binds us as a family of traditionalists with freedoms no other countries allow?  We offer up our agreements, and capitulation on certain issues, one at a time. We give in to the small demands that aggregately dissipates the rights we claim to hold as God given, and unbreakable.  We allow the best intentions to obfuscate the reality of an ever growing authoritarian reality; that of a dictatorial regime that makes or breaks banks, producers, or those who speak up against it.

It is most certainly a time to rally.  It is a time to gather with those you trust, who feel as you do, that we tread on the reality that silence in the face of danger gives no warning to that danger, and that a bell un-rung alerts no one of the perils that loom.  Perils of the taking of all that you have built, worked towards, fought for with honor, and sacrificed to gain.  It is a time to muster the strength of the many to retake that which is rightfully ours, god given and to be protected by our founding documents. 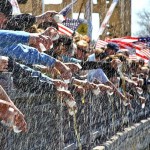 Independence day, July 4, 2009 will be perhaps only another day for another Tea Party to some, or merely another date on the calendar, and another gathering with people objecting to current government policy.  But for those who hold the belief that we can hold off the perhaps inevitable fall of this great nation for a few generations longer by educating our future leaders about our resolve and wish to remain free, it will be a new Independence day where we reclaim our voices and the will to fight back the ever growing tyranny. 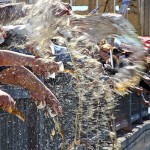