Last Week, three sets of candidates for house of representatives from Northern Michigan visited Traverse City in a forum designed to help us understand their vision of what needs to be done in Lansing to move Michigan back on to the right track.  I had considered questions and answers as content here, but given the tireless onslaught of idealistic BS from a particular side of the fence, I feel I must save my editorial energies for the bigger battles to come.

Ray Franz 101st  R – 30 years ago moved to Onekama area.  Run a grocery store and have 30 years in business in the region served on village council, fire dept 1st responder. Passionate about best to approach our economic situation in Michigan from Business standpoint.

Dan Scripps 101st D running because I feel I have something to offer.  would like to focus on creating jobs.  Want to tax companies more if they outsource, want to advance renewable energy, my experience.. practicing law.

Roman Grucz -104th? I have a BS BA and Come from marketing, have global experience. and understand this is a global economy We owe it to our children and our grandchildren to leave a better state.  Time to end party politics.

Wayne Schmidt 104th – Running because Lansing needs to change, and act like Northern Michigan.  Create new jobs and protect our environment while doing so.  been on the ground working with government and private sector in the last 10 years, and will bring that to the table.

Obvious to anyone who has been a regular here, is that I lean Right.  So if objective analysis is what you are expecting..  well  …maybe. Here is a the rub…  I try to be objective in all of my analysis anyhow.  A look at recent Michigan history, and we can all agree pretty much not too much has been done correctly.  A state government which is broke, failing manufacturing centers, and a population decline preceded by job shrinkage.  All at the same time that same state government has grown in ranks, Detroit, the equivalent of cement shoes has a collapsed government, and its schools rank worst in the nation.  Beyond that?

I really have abridged this to contain mostly my opinion about the candidates, rather than elaborate on those boring “issues” things.  These candidates, all six of them suggest they can help bring about change.  All of them feel they can set things straight.  I suspect it is a much harder task than any of them could possibly imagine.

Any except perhaps Kevin Elsenheimer. Kevin of course has been in the midst of the typhoon in Lansing, and being in the minority of the house, has probably met frustration all too often.  what is a conservative supposed to do when the majority of his liberal colleagues continue to spend money they ought not spend, and then send the bill to the citizens?  Frankly, Kevin is one of the sharpest knives in the drawer.  It would be a shame (and unlikely) to see him go.

Kevin’s challenger Connie Saltonstall seems like a really nice lady.  But I just couldn’t shake the way she reminded me of that one..  Umm  Cindy Sheehan.. yeah. seriously..  Sorry Connie you said you “retired” from like four different career pursuits… huh?

Ray Franz a business owner who has also been a vital part of his community from the day he opened his first mega mall er.. um well grocery store some 30 years ago.  This Republican politician, part of a dying breed.  You know “productive citizen” first?  Ray, though not born up here is what this area is all about.  Up early, do what needs to be done to survive, then looks around and asks what he can do for his neighbors.  Good mix.  Decent guy too.  I like these “everyman” types.  you know the kind who aren’t afraid to call attention to a faulty plan, and aren’t full of themselves..

Dan Scrips (Ray’s opponent) Started by trying not to disrespect the new MBT too much but seemed to acknowledge it kinda sucks.. well maybe.  Maybe my own opinion that he seems like a guy who wants to be a professional candidate (good looking kid, a touch of charisma) causes me to miss any thing substantive.  I just don’t trust anyone who wants the job bad enough, that their undies will be connected by suspenders to the Union puppeteers in short order in this state.  Sorry Dan..  You are their guy, not mine

Roman Grucz said straight out “I am not about to sit up here and promise a tax cut”  Honest..  Right out of the box he said in no certain terms “because we have a state constitution which requires a balanced budget”  Oh yeah I forgot..  social programs must never be touched once they are law..  oh yeah government waste must not be identified to pass savings on to the taxpayers..  Oh yeah ..because we need to spend more on GREEN technology encouragement, there is no way in hell we can be allowed to escape the oppressive taxation set up in this state.  ..my bad. Roman stopped at my house once, and his method of trying to convince me was eerily similar in the way the RMGN proposal was done.  (Find a place I was pissed at government and try to work himself as a solution to my problem, never mind all that which comes with HIS solutions)

The Republican Wayne Schmidt (Grucz’s opponent) has considerable experience as a community participant, and like many politicians has contributed plenty of hours in community service.  However, I suspect he too is a “professional politician” and is likely to be one as long as possible.  The fortunate part however, is he wouldn’t likely bring with him the UNION baggage you would see with the Democrat candidates.  His sign is in my yard anyhow.

And isn’t that what it is all about?

The Unions in this state have run a political machine which has placed in positions of power, a Governor and some key legislative seats which have robbed the state of its legacy.  Many Michiganders who have been a round for some time will remind us they have seen both good and bad Democrats over the years, but In my opinion, the recent batch of labor backed liberals have been so beholding to the unions, that their use of mental capacity is rendered moot.  They are OWNED, BOUGHT, and PAID FOR by the unions of this state.

Consider what happened when things were obviously going south late in 2007..  The Democrat controlled house allowed no alternatives to higher taxation, allowed no debate on cost saving measures and instead created a higher burden for small business.  Government (union) job cutting is OFF the table as long as the Union backed Dems remain in power.  The UAW directly inserted itself into the most incredible attempt at tampering of the Michigan constitution we have ever seen as shown in the image below. Click on the image to be taken to a larger image.  Click HERE to be taken to what the Mackinac center found at the link shown. 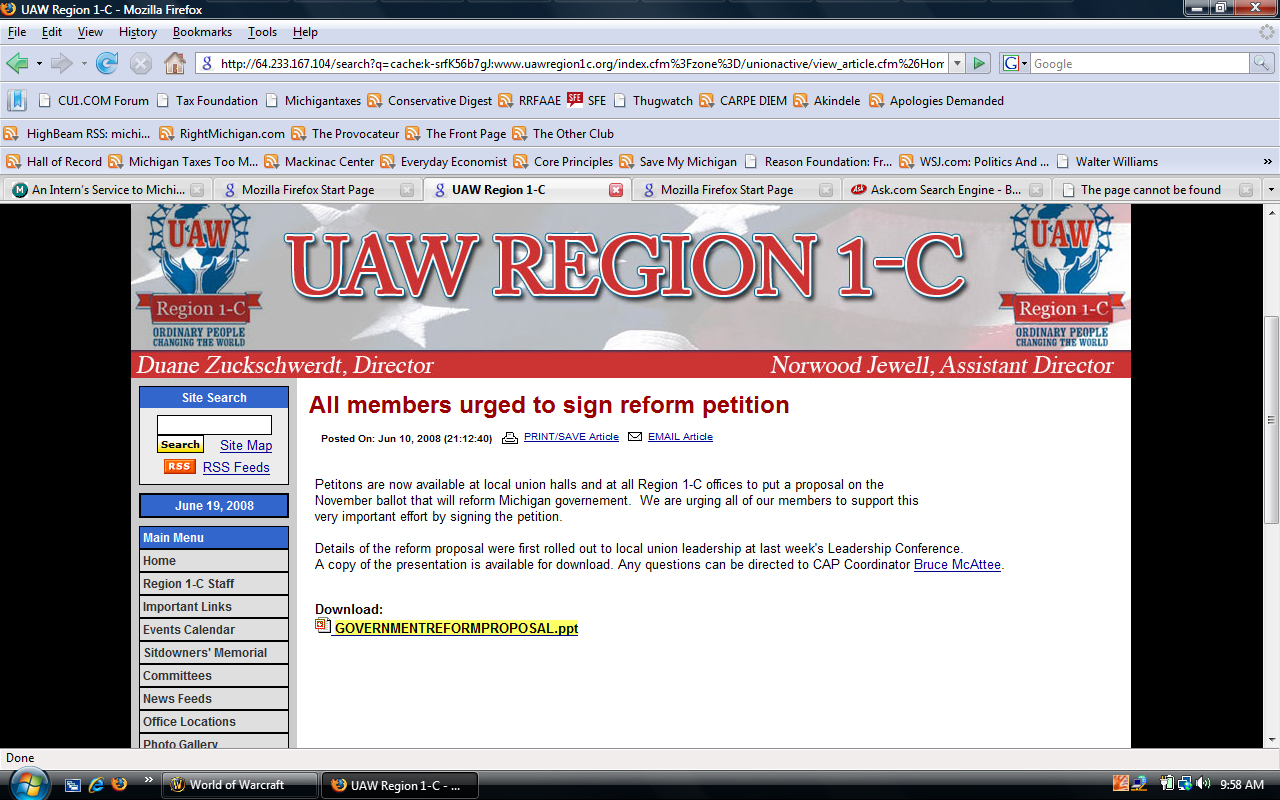 And remember they would still love for the Michigan voterto think it is all about George Bush..  will you fall for it?

This cycle you can vote for the Scripps’ or Grucz’s, or Saltonstal’s because you are mad at Bush, but remember that until the last few months it was Michigan alone which was sucking air.  A “one state” recession for several years because of liberal refusal to understand the basics of economics.

← Granholm Screwed us, and why we fail the test
Socialism & Obama Supporters, Stealing A Way of Life →