Brief seeks to ensure that proof of criminal intent remains necessary in prosecutions for most crimes; ‘the goal of our system of justice is not to criminalize mistakes made by citizens engaged in ordinary activities,’ says Center attorney 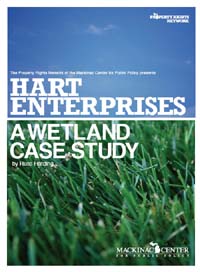 MIDLAND — The Mackinac Center for Public Policy yesterday filed an amicus brief in a Kent County case that Center attorney Patrick J. Wright described as a “possible watershed in state criminal and environmental law.” The case involves a Sparta business owner who was accused of violating state wetland law in 2006 when he extended his parking lot over a soggy area of his property to accommodate a business expansion. The defendant was found guilty of two misdemeanor crimes, but the judge did not instruct the jury to determine whether the defendant had altered the purported wetland with an intent to break the law.

“Proof of criminal intent, or what the law calls ‘mens rea,’ has long been required in criminal convictions,” said Wright, “since unlike civil penalties, they carry a stigma and often involve jail time. There are exceptions to this requirement for so-called strict-liability crimes, but these are supposed to involve dangerous substances with few beneficial uses. This case involved moving dirt and extending a parking lot — actions that should be crimes only if there’s proof of criminal intent.”

Wright added: “This is an important principle, independent of this particular case. The goal of our system of justice is not to criminalize mistakes made by citizens engaged in ordinary activities. Unfortunately, the trial court appears to have relied on an earlier Michigan Court of Appeals ruling that plainly misconstrued a standard legal test in determining whether a state environmental statute required strict liability. If that ruling now becomes a trend, members of the general public who perform commonplace activities could be found guilty of crimes under frequently complex state environmental statutes and regulations without realizing they were breaking the law.”

The current case, State of Michigan v. Taylor, is now before the Michigan Court of Appeals after being remanded by the Michigan Supreme Court. The Mackinac Center is not representing a party in the case; rather, it has filed a “friend-of-the-court” brief for the appeals court to consider.

The Center has, however, followed the Sparta wetland dispute for several years. In 2008, the Center published “Hart Enterprises: A Wetland Case Study,” by Russ Harding, director of the Mackinac Center’s Property Rights Network. Although the study did not discuss the pending court action, Harding, a former director of the Michigan Department of Environmental Quality, ultimately rejected the DEQ’s “broad interpretation” of the state wetland statute and concluded that the area in question was not a regulated wetland under state law.

The Mackinac Center’s legal brief does not address the property’s status as a wetland, but instead requests the Court of Appeals to rule that proof of criminal intent should be required in criminal prosecutions of this kind. If the appeals court agrees, the defendant’s convictions could be vacated, leaving the Kent County prosecutor to decide whether to retry the case.

← The Traverse City Neck Tie
And More On Thuggery →