An amazing thing happens when someone is promised one thing based on a particular constituency occupying the government. When unions sell their worth to the membership, they sell it in the way that God might breathe life into our bodies; as a right that no man shall abridge. They work hard to procure contracts that both ‘guarantee’ wages, and protect a particular lifestyle, in a way that is permanent.  We’ve all heard the living wage argument and claims that unions built the middle class.

Now don’t get me wrong.  I am a firm believer in contracts. I ARE A RULE OF LAW GUY.

If a contract is created between parties, those parties ought to be bound to the terms of the contract.

Makes sense right?  As an example, if I voluntarily agree to terms that bind me to a particular end (like paying on a phone contract),  in exchange for something else (the use of the phone service at a particular rate), then I should be held to account for the terms of the contract agreed upon.  If a termination of the contract results in one of the parties violating their obligation, then they should be held to the punitive measures agreed upon when entering the contract.

Yes, I believe in contract.  Morality is best served through the honoring of established agreements.

So what is wrong with the unions getting all up in arms about Lansing placing EFM permissions in new legislation? The Emergency financial managers will have the ability to break any number of contracts with bargaining units in some distressed municipalities. Its a part of their new set of tools.  Why would those municipal workers be incorrect when they ask this question of Rick Snyder and Michigan’s legislators: “Who are you to break our contracts!?”The workers would be right except …

For a thing called a ‘coercive contract.’

According to the Oxford English Dictionary:

It happens if one has no choice whether they enter an agreement.  At least one side.  In the case of government and its employees, a non right to work environment also requires the employee to imbibe the mission of the true employer, or arranger of employment, the labor union.  The employees in a labor union in Michigan have no control whether they will participate or support the union, thus are coerced into the contract that PERMITS them to pursue their skill or trade, unless there exists another industry that has no negotiated labor element.

In Michigan, there are three parties in all union represented labor contracts, and specifically with governmental bodies for the purpose of this argument.  Those three parties are the workers themselves, the labor organizers, and the employer (government municipality, or other)

The coerced contract between the worker and the union is one element where the worker’s choice becomes subject to the monopoly.  Is a monopoly moral?  To participate in that monopoly, the worker must submit some of his or her earnings to people who control that monopoly, yet have no interest in the product created by the worker.  A form of parasitic arrangement is formed by default of the inability for the worker to terminate his arrangement with the union without also losing his or her job.

The coerced contract between the Employer and the union is one which results from the inability for the employer to hire outside of the ‘closed shop’.  The absolute limitation of a pool of employees to the union provided pool creates the monopoly.  Again, is a monopoly moral?   To participate in that monopoly, the employer must submit to a cost of services not by efficient selection of value, but one that uses its position as a monopoly to extract from the employer as much as possible.

In both cases, the employer and the workers do not have their interests served very well.  An example might be made of how the public school systems are abused with regard to their health benefits package through the union.  Because the dues alone were not enough to feed the parasitic nature of the MEA, it created a special corporation which recycles BCBS policies and adds its own mark up before selling it to the schools.

To extort someone is to make them fearful that if they do not comply with one’s demands they will be injured. The harm that is threatened is usually physical harm or professional harm. Whether or not one follows through with the extortion threat does not matter. Trying and failing to extort someone is still considered extortion. Threatening to extort someone and not following through with the threat is also still considered illegal. This is particularly true if the individual being extorted singed a contract agreeing with the demands. Since they were coerced or technically forced into the contract, the contract is null and void. The crime of extortion has still been committed. 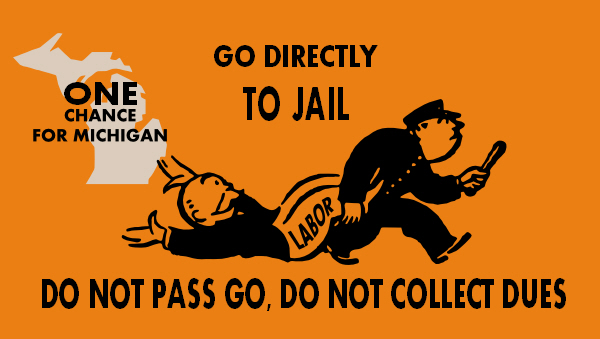 Perhaps especially when looking at the outright THEFT which happened to folks who are not even employees.  When the state took from home based day care workers, dues which they did not owe.  Dues that merely fed the beast which devised a plot to use government to its ends in the THEFT of those dues from illegally enrolled day care owners.  A plan which had as accomplice the former sitting governor Jennifer Granholm.   A scheme which should see the former governor, as well as any other accomplice in jail for FRAUD.

But still there are those accomplices like UAW boss Bob King,  who feels their ill gotten gains have been ripped from them inappropriately:

A few days after the state’s announcement, King expressed outrage at the end of the union deal and Gov. Rick Snyder’s call to reduce hourly subsidy rates for some day-care providers.King, in a press release, said Snyder decided to “strip collective-bargaining rights from nearly 20,000 subsidized home-based child-care providers, many of whom are UAW members.”

Of course those “UAW members” A. had no representation, and B. Had not asked for it.

Never mind those little details.  Calling the state’s discontinuation of theft for the union “an attack on the working poor” befits the contradictory philosophy that seems to drive those who rob by imposed monopoly and extortive measures daily.  While claiming to protect wages and jobs, the very folks who bargain for the ‘middle class’ literally steal from the victims they claim to represent.  King’s charges PALE in comparison to the rampant abuses foisted upon the taxpayers and workers alike.

Perhaps those “contracts” were null and void when they were made?