Decisions, decisions.. Obama had to move his conference time to accommodate an already promoted shindig..  But never fear, NBC laid that egg, and continues to incubate it, and wouldn’t let the big guy down.. From the LA Times..

“And NBC initially balked when the White House announced that the news conference would be at 9 p.m., 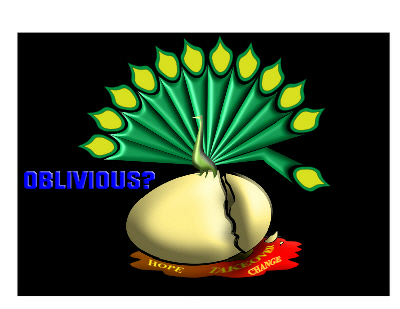 because it had put a lot of promotion behind a special episode of “America’s Got Talent” featuring an interview with that surprise British singing star, Susan Boyle. “

But they will carry it, because NBC is all about change… right? No.. Its because they have even more invested in that failure who resides at 1600 Pennsylvania Ave. I guess we all have our priorities..  like screwing the grand kids.  Thanks a bunch to the green peacocks.

Obama will be talking about his “health care” to be sure, but he probably won’t mention the illegals who will enjoy the perks (while they last) The Democrat congress that is still on board with “the one” refuse to make sure illegals wont be participating..  From Michelle Malkin:

“Immigration analyst James R. Edwards, Jr. reported last week in National Review that “no health legislation on the table requires federal, state, or local agencies — or private institutions receiving federal funds — to check the immigration status of health-program applicants, so some of the money distributed via Medicaid and tax credits inevitably would go to illegal aliens.” Moreover, the Senate Finance Committee plan creates a new preference for illegal aliens by exempting them from the mandate to buy insurance.”

As long as Obama has tingly little legs doing his footwork it will last a little longer, and the public may just give in from pure exhaustion, right GE?

Sit on that egg a little while longer GE, NBC, whatever the heck part of you needs the attention.. My bet is you’ll never get rid of the stink.

← Snyder Is Running Under WHAT Party Banner??
Mark Brewer Took The Blue Pill.. →

1 comment for “NBC Just cant resist.. no really.. they cant.”