Not that I really expect anything to happen with Andy Dillon’s proposal, at least as long as Granholm is still governor, and on the leash of the MEA or other big labor, but it should be noted that there would likely be some significant saving by looking into the union negotiating process with your school boards for the health benefits received. 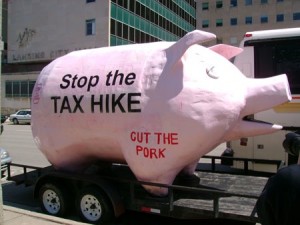 Just a gratuitous posting of a picture of "Perks" the pig.

Generally, I would say to the kids: “The MEA is NOT about your education. Understand some of your teachers will get their marching orders from the MEA, and under some circumstances just might ignore your pleas of “wanting” an uninterrupted education.  ”  In fact..  The MEA’s (Michigan Education Association) real value is just doing whatever is necessary to keep them at the “comfort level” of #4 in the nation for pay and atmosphere.  The problem is, while the rest of the state suffers at the hands of those who the MEA supports politically, the teachers do just fine.  Those others who are hurting are your parents.

To the school employees: “You have had a good run, but guess what.. It might just be time to take your medicine along with the other unfortunate souls who have paid your checks and provided you with the excellent benefits for so many years. But it doesnt mean you are without a course of action.  Just imagine if you could make more and do better, by [shudder] actually performing better than the next guy, but.. sorry you belong to a union..  Mediocrity is guaranteed by your representation.  You cannot do better unless you go into the private sector, and make IT better.”

But On the other hand, perhaps it just wont happen..  Who cares what is happening anywhere else?  When on a moments notice you can huff and puff and blow down the doors of a school board which is trying to make the difficult decisions that are necessary for the continued education of our state’s children.  An effort in 2008 failed.

But even on THAT matter, the MEA however, HAS offered a little hope recently.  With its refusal to back a recall attempt in Lenawee county:

Jim Berryman, Uniserv director for the Michigan Education Association, has headed the negotiating team for the TEA for the past 10 years. He said the teachers’ wages have taken a hit in the past five years, but it was done with one goal: keeping the quality of education high in Tecumseh during a rough economy.

Berryman said the MEA and TEA are not backing the recall and will not take a position on it. That issue is between the board and school district voters, he said.

Not only that.. but lo and behold, the MEA stood up against growing government in this hard economic cycle! Or …was it merely lip service?

As a protector of those who pay their dues, the MEA does a fine job, EXCEPT it is not willing to give up the perk of playing middleman in the insurance game between school employees and BCBS of Michigan. For what the School employees, and the taxpayers contribute, perhaps they could get even more ..sans the skim.

Jack McHugh of the Mackinac center points out a few things folks should know when discussing these issues, which are fresh with the recent declaration of Democrat Andy Dillon, that he would consider pooling the benefits of school employees for maximum value to the state and tax payers..

Under the current system, every individual school district negotiates its employee health insurance with regional teams from a statewide union. This is a disaster, and has been so for decades. Most school boards are like 98-pound weaklings boxing against a powerful union that’s rippling with political muscle. The union uses its muscle to steer business to the Michigan Education Special Services Association, the MEA’s third-party administrator that outsources insurance underwriting to Blue Cross Blue Shield and then resells the policies to school districts.

Yeah.. What he said.

McHugh acknowledges that the savings would likely not be as large as Dillon suggests, but that they would be large enough to be considered worthwhile.

The $900 million savings Dillon promises is probably exaggerated, given evidence I’ve seen suggesting that school health insurance consumes around $2.6 billion annually. (Better figures will probably become available soon.) The Speaker says a larger pool of employees will allow the state to save $400 to $600 million by squeezing health care providers for concessions. Economies of scale add another $200 million, and the balance comes through administrative and other efficiencies. That is mostly “blue sky,” but the political dynamics described above are real, and have the potential to save serious money.

McHugh added his own suggestion about HSAs as well, which might actually bring the savings to the point that Dillon considers possible, but ultimately backs up the idea that Dillon is on the right track.. IF HE PROCEEDS.

I am in a sales / service type of business, so you will see this quote again from me in future articles…  “Undersell, but Overdeliver..  It will keep em coming back.”  There is little so satisfying as finding you are getting more than you bargained for, but in a good way.  It limits returns, refunds, and creates goodwill.

But when dealing in the public sector, it seems all sales are final. So maybe this is not applicable..  But I am certainly willing to let Dillon prove me wrong.