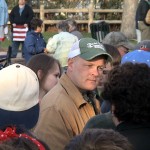 Joe Speaks with Petoskey Tea Party attendees after the May 1st event.

Multiple estimates have the head count at nearly 1200 (my personal count at right around 1000) for the Petoskey Tea Party May 1st.  Speakers including “Joe the Plumber” provided down to earth no fear approach to the criticisms of government overreach, casting disdain for both the Republican AND Democrat elected representatives.  Chided were those who would be politicians seeking employment, over being statesmen who would do what is right and needed.

The Michigan Fair Tax organizers were blessed with a beautiful day to present an explanation of the Fair Tax and how it would be far superior to the current complicated tax code Michigan is currently saddled with.  While recognizing the Fair Tax is a step in the right direction most of the speakers acknowledged Michigan and the nation as a whole have a larger problem when it comes to spending.