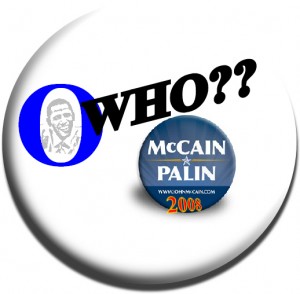 Sarah Palin did as she was expected to do.  Hit one out of the park, and relegating the other guys into relative obscurity for the moment.  Though it doesnt make the SOCIALIST ideas of O… uhh  or Joe..  uhh  ..THOSE GUYS any less dangerous, maybe, just maybe Palin’s bright light can steal the valuable media attention away for long enough.

I created (made) several of these buttons on Tuesday prior to going into the RNC08 convention.  Using a photo printer, and a little button maker bought 14 years ago, I was able to punch out about 12-14 unique collectable buttons which were passed out to convention workers and a few attendees. I wish I had had more time to work with, as there was material for about 40 more.  These things were a BIG hit!

← Land Lands More!
I missed being there Wednesday night at the convention, →