But I have the memories of a lifetime. And a realistic understanding of why we MUST have McCain in the oval office. 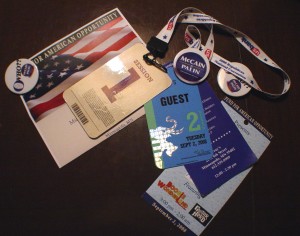 Memories of a Presidential Convention...

The Palin nomination has inspired both HOPE in the ranks of the true Conservative Republicans, and FEAR in the hearts of Socialist Democrats who wish to have their flag bearer O-Who as leader of the world.

Note, that I said “leader of the world,” and not the more appropriate “leader of the free world.”  The incredible influence the President of the united states carries can be quite impressive, and the election of such a marxist as O-Who would leverage much of the free world in such a way theat would be unacceptable to anyone who holds freedom of thought as something of value.  An “O-Who” presidency would see passage of the Fairness doctrine, and control through other regulation and taxation of business.  By picking and choosing who gets the favor of government, our elected leaders are often rewarded quite well as they leave public office, and through their investments.

Sarah Palin, who by all measures is nearly an “every man’s” leader.  Respected and feared by opponents, yet truly a loving and strong family individual.  The problems the MSM seems to think will harm her in its attempts to sabotage the McCain bid, only reinforces the belief she is actually more representative of ordinary citizens and endears her more to Americans everywhere.  The teleprompter, during her speech faltered, and sometimes sped up, (perhaps sabotage by gremlins from the O-Who camp.. Hmmmm?) but never caused an abberation in Palin’s message, and merely proves her ability to improvise, persevere, and conquer, as she did in the “home run” speech given.

Let us not forget to credit where credit is due though.  Many times I have heard, and even from my own lips that John McCain was not my original pick.  My own disagreements on some minor, and not so minor policy issues had up until the VP pick kept me a little more stoic.  But I have also found that no one individual has ALL the answers correct on any test.  And in the office of the Presidency, surrounding ones self with people of high calibur intelligence, knowledge and core principles as he has already demonstrated with this pick, I feel incredibly at ease.  Palin’s nomination, shows thinking outside the box, and his continued service to the country shows a dedication normally unseen.

His assembly of the campaign team in its present form is another example of real leadership.  To come from near oblivion in the early part of the campaign should not be a missed point.  Though outspent by Obama, his advertising has been compelling, and points out rightly the dangers of looking to “hope” without substance, and “change” without asking what change will ultimately happen.  The questionable associations by the O-Who himself are identified as no MSM outlet would dare, and McCain himself “approves these ads.”

I may have not always agreed with McCain, but I suspect earmarks, and new taxes would be harder to pass with him in office.  His fight against pork is legendary, and his most recent activities with the VP pick, and media blitz are deserving of serious respect. In 2008, he has my respect, my hopes, and my vote.