Let us entertain you.

The Romans did just that.

During some of the worst times and under questionable government , Romans were entertained, given food, and kept subservient through all manner of sociological bribery and extravagance. “panem et circenses”, as described by period satirist Decimus Junius Juvenalis, (Juvenal) describing the social distractions as “Bread and Circuses”.  One could find a number of similarities between the Romans and ourselves as our society engages on its natural path of entropy.  Especially considering the mass distractions of Rome and our era, a few of those similarities are certainly clear, and people are still essentially the same.

Titillation and free stuff is a great way for government to avoid being held accountable for its ongoing failings.

Through ‘gladiator’ sports such as football, NASCAR or boxing, the excitement easily overcomes what might be the boring responsibility of eternal vigilance.  Movies that demonstrate very real violent performances of the most graphic kind, to the mildly or more severe pornography certainly satiate a number of other necessary diversions.  As a bonus, movies can serve to propagandize watchers in a way not available when the lions tore Christians limb from limb.  If we look, many of us might see in ourselves the very same lust for excitement through the actions of others, and the danger or reward they face or receive.

It is hard to determine when the United States might best have represented its Republic as the best form of Government, but it couldn’t be clearer that it is now more like Nero’s Rome, than Washington’s America.  The reality that short attention spans exist alongside democratic process can be confounding to those seriously engaged in the art of public policy.  Far more insidious however, is that there are others who know this, and take advantage of it.   It is an at hand reality and advantage  to be utilized for political gain that in turn confers real power upon the wielder or supporters.

And perhaps that is the reason “the confounded” must also sometimes have to play the same games.

As one of those confounded, its not hard for to reach for the creative edge, and sometimes be farcical in presentation.  It is unfortunate that sometimes the simplest concepts of common sense are already so obscured by distractions that the drama must be exaggerated sufficiently to reach those already inured to it.  The tools of satire, humor, art, or simple fiction to pass a message are common, and not exclusive to any ideology or truth.

However, during the presentation of fiction to promote fact, those seeking to present truth might be a little more cautious than recent story teller Glenn Beck, as he relates an unfortunately all-too-familiar danger to our way of life; Agenda 21 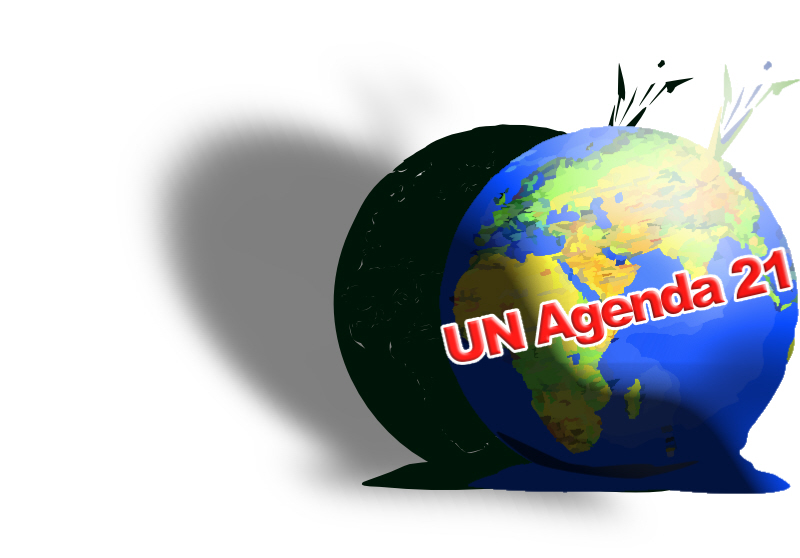 On these pages we have presented as straight forwardly as possible the dangers represented by Agenda 21; a plan that if fully implemented, is every bit as destructive to our rights as its name implies.  Hiding out in the open, this plan fostered by the United Nations, and implemented through stealth government funding and manipulation through local initiatives is the end to private property rights as we have ever known them.  As those rights disappear, so too does our freedom, and ultimately control over our own lives.

The three legs of a stool; Life Liberty, and the Pursuit of Happiness as clearly acknowledged in the declaration of independence, and enshrined in the US Constitution and bill of rights, must all be respected, lest the stool fall over.  Without LIFE, all else means nothing. Without LIBERTY, life becomes meaningless and property ownership is impossible. Without the ability to own property, command one’s own resources, or PURSUE that which creates freedom, and a better life, there can be no freedom.

Agenda 21 acknowledges no such allegiance to such principles, and quite literally topples the stool by removing the leg most affected by incentive and human behavior. It is foreign to principles adopted by our founders, yet is accepted implicitly through activities premised as being “socially responsible.”

The argument in favor of ownership is difficult enough as we muddle through the social compact which allegedly provides for our  governments.  We expend our resources (property) in a way that provides the framework under which opportunity is allowed to become one’s opulence, or perhaps pauperism.   Government’s proper role in refereeing contract, providing for common defense, the policing and protection of the innocent, has become one that plans our outcomes, subjugates us to our neighbors, and serves criminal intent through takings.

The abuses suffered under a monarchy become pale to the abuses fomented by the many, through an improper mission such as that which builds from A21, and its very foreign declarations.

The dangers of top down planning, social equalization, and refusal to honor private property rights includes far too many non fiction narratives to be ignored. The examples of Mao, Stalin, and Pol Pot  efforts resulted in 10’s of millions dead in the 20th century.  Other [minor examples] who followed the very same practices and beliefs?  300,000 killed in Romania as part of agricultural collectivization and political repression, up to 100,000 people killed in Bulgaria as part of agricultural collectivization and political repression, and in another land ‘reform’ program, North Vietnam saw nearly 180,000 perish.

No one could possibly imagine it happening here.

Few would knowingly steal from, imprison, or purposefully harm their neighbor in our country, right?

I would argue that statement is true.  I don’t know many folks who would lower themselves to such evils knowingly.  Yet the very foundations of communism, and social controls that beget such murderous campaigns as Mao’s Great Leap Forward or Pol Pot’s Khmer Rouge agrarian communism are a part of the abuses fostered by such simple promises of community planning.  People involved in such efforts would not likely see themselves as murderers and communists, yet they promote unwittingly the values that are abused to make make such atrocities possible.

The difficulty reaching those especially steeped in the planning processes is great enough without confusing the issues presented by a work that is sold both as a fictional piece, yet purports to describe a new future reality.  Trying to convince the advocates of visioning, social controls, and land use policy that they are more like the promoters of last century’s murderers than PTO or Rotary members might be a futile exercise.  In anyone’s mind, they act only morally.  A mental wall will go up, and the consideration will likely not happen.

Glenn Beck, in his book Agenda 21 might actually reach some of those not invested in the planning and visioning processes, but for those who cannot accept such a reality he proposes, the book will remain fiction and anyone who uses the term “agenda 21” to describe their activities will be ostracized for citing a work of fiction as factually relevant.

But the future painted by Beck (and his ghost writer) could very possibly be a reality.

In fact, if history has demonstrated anything, it is that those who seek power are willing to use whatever tools are at their disposal.  Land and property control in the top drawer of that tool box.  Providing social equity to those who produce the least, the next down.  Property rights are the easiest of our rights to assail, because it can be done with sleight of hand and under the guise of our common welfare.  Becks book might accurately describe what other abuses shall follow in the absence of those rights, as described in the paragraphs above.  However in the end, it is a work of fiction, and any claims will be first considered in that light.

There is no doubt that Glenn Beck tries to point out the very real dangers that arrive with A21 policy.  And alongside the story he would hope would open eyes, he also takes the liberty of titillating the reader with extremes that are possible, yet too much to accept for some.  One reviewer says:

“As I read this book, my thoughts returned to George Orwell’s book “1984”. I wondered how many people in 1949, the year of its’ publication, read the book and thought it was pure fiction? Yet here we are, over 60 years later in the era of Big Brother, Thought Control and Newspeak. Looking 60 years in to the future to 2072, what will the world be like. On our current trajectory of sustainable development policies, “Agenda 21″ vision of the future could become all too real.”

Indeed Glenn Beck in entertaining us, might have hurt the message he was trying to deliver.  Its also possible those of us who are trying to offer information about what is happening in our own communities now face another wall to scale in front of the sleepy populace.  We will hear: “Beck is selling a book, and you are falling for it”, and those having to decide to educate themselves to the truth, or accept that conspiracy theorists abound, will make the easiest decision of the weekend.

To sit on the couch and watch the game.