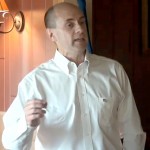 The win was Glenn’s third debate straw poll victory since September, and he won in impressive fashion, taking 54 percent of the vote and leading the second place finisher by 32 percentage points.

“I’m humbled and encouraged that my proposals to create jobs for Michigan and cut government spending are resonating so strongly with Republican and conservative leaders and voters,” Glenn said. “Our state and nation are at a crossroads, and we need to elect a U.S. Senator who understands that the best thing government can do to help create jobs is get out of the way and let a free and productive people put our country back on the right track.”

Following Glenn’s 54 percent of the vote, Hekman won 22 percent, and Konetchy, ten percent.  Marino, Boman, and Hoekstra, who did not participate, were in single digits.  Durant received no votes at the event.

Hoekstra hasn’t participated in a multi-candidate debate since he and Durant lost a straw poll vote to Glenn following a TEA Party-sponsored debate at DeWitt in late September, but the Traverse City debate was the first Durant has missed.

On Monday, Glenn accepted a proposal by Durant for a Lincoln-Douglas-style, one-on-one debate between the two candidates.  Durant has yet to agree to specifics but Glenn said he hopes to schedule several such events in January and February before a statewide convention of TEA Party leaders meets Feb. 25th to endorse one candidate among the field.

Glenn said he is also willing to debate any of the other GOP candidates one-on-one.

Glenn has a 33 year history of fighting for the cause of limited government and conservative values.  Glenn led the successful 1980s effort to pass a Right to Work law in Idaho, prohibiting compulsory union membership in that state, and he is a founding member of Michigan Freedom to Work, which is pushing the same legislation here.

As a county commissioner, Glenn authored the first Medical Savings Account health insurance plan for county employees anywhere in the nation. He was invited to testify before Congress and featured in a news conference by the U.S. Senate Finance Committee. One Congressional spokesman called Glenn a national “pioneer” in free market health care reform.

Glenn has served twelve years as president of the American Family Association of Michigan, during which he was one of two co-authors of Michigan’s Marriage Protection Amendment, which was approved by nearly 60 percent voters in 2004.   He is a husband and father of five, an Army veteran, an Eagle Scout, and was captain of his high school’s Fellowship of Christian Athletes.