I’ll be the first one beating the drums for our natural rights. 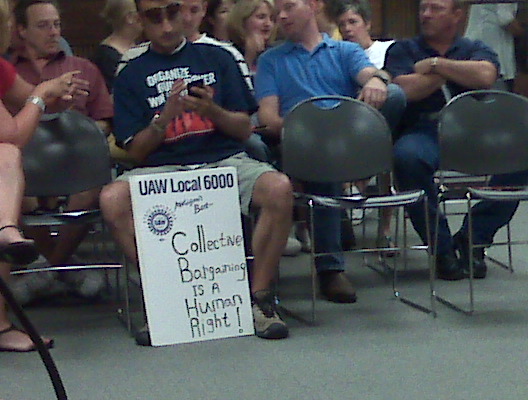 A sign held in a recent commission meeting read “Collective Bargaining Is A Human right”.

I must agree with that.  It is indeed.  As a right, we enjoy free association among men, and thus our ability to enjoin with each other to persuade to our best interest the rewards for our toils is paramount and has been provided by God.

It is also the right of the employer to refuse to agree with the desired outcomes of those who collectively ask for conditions, wages and other forms of compensation.  That is the bargaining itself.  You have the right to ask, we have the right to refuse, and the cycle is proven.  And there can be no doubt that the power of many who would withhold their services and skills is compelling.

Thus it is important for unions who wish to negotiate (bargain) to convince those who would cross their picket lines that it is not in their best interests to do so.  Once upon a time, it was under threat of violence, and much was accomplished under that threat.  In the end capitulation in some of the larger industries brought relatively high wages, and “better” working conditions to the employees.

Without going into the effects on cost to those employers, I will skip ahead to the now, and mention we are at a point where jobs are more scarce, and even the unions have had to give in under some circumstances to lower starting wages and deals that aren’t nearly what were acceptable years ago. They have had to concede to employers who if held to yesterday’s expectations, faced imminent closure and bankruptcies.

Having seen it before with the Teamsters, I get it.

The hard lesson is that what worked yesterday with regard to labor relations is unlikely to hold the same weight today.

What has gone so wrong that the country that made itself the wealthiest on earth in the 19th and 20th centuries — in part by building the Erie Canal, a network of railroads and the interstate highway system — would now give up?

One answer is labor has become increasingly unproductive. Decades of government-sanctioned work rules and regulations that impede productivity while hindering management’s ability to manage have caused construction costs to soar and efficiency to plummet. This is not a criticism of the high salaries and benefits earned by the skilled construction trades; their work is dirty and dangerous, and it’s fair that they be well-compensated.

But it has to be accountable to the workers in a way that it doesn’t like.  It needs to stay out of politics and concentrate on representing its base better.  It needs to maintain training for the skills and trades, and stop contributing to dynasties that it feels will reward its waste.  Dynasties that may have argument with some members of labor who cannot escape the mechanism of support, except in certain states.

Like any other business, competition is good.  You get more for providing more.  Ideas on how best to serve an employer, or in fact withhold the BEST service from that employer for lack of sufficient compensation, is by far the best way to reconcile freedom for the employees and employers alike.

Freedom to work does this.  It accomplishes this by making the leadership and negotiators more accountable for results (which favor the employers) and reasonable work rules (the work for employers AND employees), and for the wages necessary  to attract the best employees (great for the employees).  If the union fails to perform for the employees, the workers quit the union and go it alone.  If it fails the employer, the employer will negotiate to pay less.  If the union gets too involved in politics that are disagreeable to its workers, then it is punished by those workers withholding dues.

It is simply consequence for action.  A union that is inviting for its manner of finding best results that serve all will be more attractive to join.  It is competition, not coercion. Unfortunately sloth and mental laziness restrict such ideas.  Forced unionism in states such as Michigan allow waste, political gerrymandering, and corruption.

Forced unionism is ruining the unions,  the jobs that host unions, and driving employers away from our great state for fear of the trap that forced unionism brings.

Its time for Freedom to work legislation in Michigan