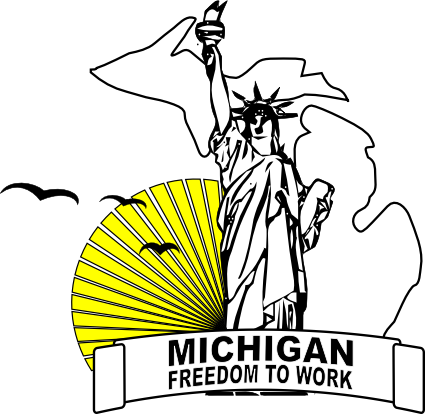 All hands on Deck!  Its time to take back our state, and regain control of our own efforts and skills.

This press release comes from only one group involved in the effort to unshackle Michigan workers to their unions, and bring accountability back to workers’ representation.  From the Campaign for Liberty Tony Demott begins. (Note that Terry Bowman, a UAW worker is a point man in this)

Over the past couple of weeks, we have been working to put Senate Majority Leader Randy Richardville on record on Right to Work.  Will he allow a vote?

We are not alone in this fight.  In fact, we’ve worked closely with Terry Bowman, President and founder of Union Conservatives.  I’m honored to introduce Terry and his group to you.

As you read Terry’s message below, I hope you savor, as I did, the realization that our strategy is being adopted by more and more organizations.  We should stand proud of our stance for Liberty within our own communities and political parties.  It’s great to see others standing up within their communities and organizations as well.

I ask all Campaign for Liberty members that belong to a union, or are retired from a union, to let Terry know of your support for our shared cause.  Please click this link and let us know if you are–we will contact you and discuss taking a stand with Terry and other Liberty-minded union members to support Right to Work.

My name is Terry Bowman, UAW member, and President and founder of Union Conservatives.

We are a group that is–for the first time in union history--reaching out and organizing conservatives within the unions.

You see, we believe it’s essential that conservative union members join together to confront the political injustice of forced unionism. At least 40% of the 14.7 million union workers do not vote in line with the far-left political agenda of their union bosses.

Yet they are forced by law to pay for their political agenda or lose their job.

From libertarians to independent voters, from conservatives to Reagan democrats, between 5 and 7 million union workers are left without a voice and are consistently persecuted, harassed, and marginalized when they make their political voices heard in the union workplace.

I can personally attest to the terror factor.  Many union conservatives express to me their fear of being “outed” and persecuted.

Because of this, many “keep their heads down” and are genuinely afraid to speak up.  It is for these people that Union Conservatives was formed.

We are reaching our goals by adhering to our 3 foundations:

Tony and I have teamed up for an issue that is near and dear to our beliefs: Right to Work.

For the union worker, Right to Work honors the 1st Amendment guarantee of freedom of association, including freedom not to associate.  It is that simple. As it is now, in Michigan, a majority of employees can form a union and force the minority to pay dues or be fired.  There is no recourse for the employer or the employee that doesn’t want to join.  The contract between employee and employer can be overridden by the union–the union created by no agreement with either party!

We strongly believe in Right to Work because it is a civil rights violation to force workers to financially support an outside third party as a condition of employment.  The passage of the 1935 National Labor Relations Act gutted our constitutional freedom of association, and we believe that the NLRA must be repealed.The abuses today are visible everywhere.

A doctor reports to me that unions can require prior approval for HMO procedures.  He had one life-or-death case where prior approval was not possible, because some 19 year old clerk in the union offices refused to authorize payment.

Another supporter was forced to pay dues for ten years to the union at the golf course she worked at–even though, as a seasonal employee, she was ineligible for any benefits!  Like so many others, she was afraid to speak up.

This is why it’s so vital that you sign Campaign for Liberty’s Statement of Support for Union Conservatives.

The more voices we have, the more easily more people can find the courage to speak up.  Our strength is in our numbers.

But this is about more than freedom.  It’s about restoring Michigan to its greatness.

Forced unionism has devastated Michigan’s economy perhaps more than any other state.  Companies rightly understand that forced unions are a threat to their ability to do business, and choose to build in Right to Work states rather than face Michigan’s draconian union demands.

Folks, Michigan has the best trained, most abundant factory workforce in the nation. And, we are surrounded by fellow forced union states.  Companies all over the area would expand into Michigan.  From our engineering base to the skilled trade workforce, Michigan would offer a perfect environment for attracting new business and the well-paying jobs that come with them.

Boeing considered renovating and using the Willow Run assembly plant in Ypsilanti for new manufacturing.  Instead, they chose South Carolina, a Right to Work state.

Have you seen the TV commercial for the BMW plant in Spartanburg, South Carolina?  The plant employs over 7,000 people–jobs which might have come to Michigan, were we a Right to Work state.But there is something that we can do together to help Michigan’s economy back from the brink of disaster.

We can work together to help pass a Right to Work law here in Michigan.  Click here to join us.

As a group of union workers who embrace reality, we realize that Right to Work is not the villain that the union officials say it is.  It represents real jobs, real economic advantages in a state so desperately in need, and the freedom and liberty to choose.

We believe that if Michigan becomes Right to Work, we would immediately be a magnet for these new manufacturing jobs.

This summer, Union Conservatives is organizing union workers who are with us on the Right to Work issue.

If you are a current union worker, former union worker, or retiree, I ask you to join Campaign For Liberty and Union Conservatives in this cause.

We are planning a press conference to announce to the citizens of Michigan that we are union workers who believe that everyone has a right to be in a union—but only if they choose to do so.

We are seeking as many current and former union members to stand with us.  Will you?

“…Employees of the Federal Government shall have, and shall be protected in the exercise of, the right, freely and without fear of penalty or reprisal, to form, join or assist any employee organization, or to refrain from any such activity.”

The very order that gave collective bargaining rights to Federal employees also guaranteed a Right to Work status for all employees of the Federal Government!  Here in Michigan, we too can have those rights; but only if we are free to refrain from any such activity.

Will you stand with us?

P.S.  If you stand with Union Conservatives, please sign Campaign for Liberty’s Statement of Support, and be sure to include your union background.  It’s time to stand together and get this done.

Feel free to forward this information to your union friends and neighbors!